Hong Kong officials are seeking a cruise ship to restart the program of short cruises from the city to provide residents brief vacations as they work to restore more normalcy after extended COVID-19 restrictions in the city. Reports indicate that they are seeking to bring a former P&O cruise ship owned and operated by the Chinese since 2019 to Hong Kong as a replacement for the international ships that had been operating the cruises until they were ordered to suspend operations early in 2022.

As first reported by the South China Morning Post, Hong Kong tourism officials are in discussions with a brand known as Astro Ocean Cruise, set up by COSCO Shipping and China National Travel Service as one of the first operators of a large cruise ship dedicated to the Chinese domestic market. The company acquired a single cruise ship, the P&O Oriana in 2019 and renamed her Piano Land for short cruises from China.

The plan calls for the Piano Land to begin offering the short cruises to nowhere from Hong Kong possibly as early as July 1, which according to the newspaper would be timed to mark the twenty-fifth anniversary of the handover of Hong Kong from the British authorities to Chinese administration. It would be a similar pattern of short cruises to those operated in 2021 by both Royal Caribbean International and Dream Cruises from the city.

At the beginning of January 2022, Hong Kong officials ordered both cruise lines to suspend operations as the number of cases of COVID-19 began to increase. Dream Cruises suspended all of its operations shortly after that due to the financial collapse of its parent company Genting Hong Kong and the Genting Dream which had been operating the cruises recently was repositioned to Singapore. Royal Caribbean in late January announced it was also repositioning its one cruise ship operating from Hong Kong, the Spectrum of the Seas, to Singapore six months earlier than planned and would keep the ship based from that port for the next year. Royal Caribbean was reportedly frustrated by China’s tight COVID controls although they are said to be in discussions with Chinese officials about possibly restarting cruises in the future. 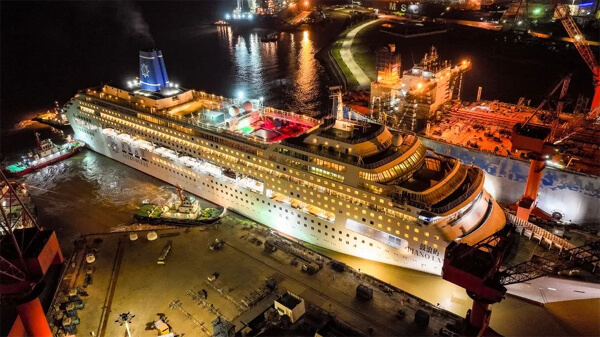 Built in 1996 by Meyer Werft, Piano Land first operated as P&O Cruises’ Oriana sailing in the UK market for 23 years. P&O retired her in 2019 to be replaced by larger ships. Shortly after arriving in China, her operations however were suspended as the pandemic began. China reportedly gave the cruise ship permission to resume operations in mid-2021 but it is unclear if she is currently in service.

COSCO reported last week that Piano Land has just undergone an extensive 45-day renovation, possibly preparing her for a return to service. She completed class surveys as well as repair work and the installation of new shore power capabilities and a new ballast water system. The passenger facilities which accommodate nearly 2,000 people were also renovated during the stay in dry dock.

Observers noted the Piano Land might not be as well suited for the short cruises both due to her smaller size as well as the lack of certain amenities. At 70,000 gross tons, she accommodates a third fewer passengers than the cruise ships that had previously operated the cruises while Hong Kong also places strict restrictions on capacity to ensure social distancing which would further reduce capacity on the Piano Land. She also does not have a casino which is a popular attraction for the short cruises.

Tourism officials point out that the short cruises were popular carrying over 130,000 passengers during the few months they were in service. The tourism board is now planning future promotions to help restore the travel industry and normalcy to life in Hong Kong,