A group of Greenpeace activists in Germany targeted an Oldendorff cargo ship in their efforts to call attention to their demands to stop offshore drilling and gas production. The vessel, the Emma Oldendorff, was preparing to load a cargo of pipe bound for Western Australia as part of a new offshore LNG development being undertaken by Woodside.

Greenpeace reports that 20 of its activists boarded four inflatable boats in the port of Brake on the Weser not far from Bremerhaven. They were able to move undetected and come alongside the 39,300 dwt cargo ship which has been docked in Germany since the end of last week. Registered in Portugal, the cargo ship was contracted to carry pipes that are part of an order for 300,000 tons from Europipe to be used for the development of the Scarborough field located about 230 miles off the coast of Western Australia.

Two of the small boats made their way to the side of the 590-foot vessel painting messages on the hull. One read “No New Gas” and the other was “#RWE xIt,” a reference calling on the German energy company to stop its involvement in the project. The activists in the small boats also unfurled banners reading “The Sea is not an Industrial Area.” The other small boats were able to reach the dock and activists climbed up onto the pier and sat on the pipes to prevent their loading onto the vessel. 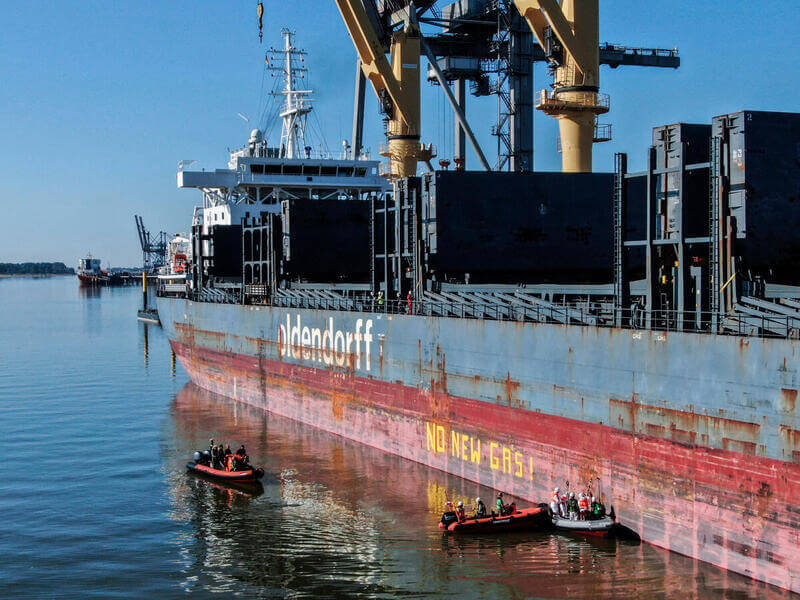 The protests were designed to call attention to Woodside’s Burrup Hub project, which includes opening up the Scarborough gas field. Last fall Woodside, which owns three-quarters of the JV along with BHP which owns the other quarter, announced their plans to move forward with the new LNG field.

The companies report that Scarborough is estimated to contain 11.1 trillion cubic feet of dry gas. Development of Scarborough will include the installation of a floating production unit and initially the drilling of eight wells. The full project calls for 13 wells and the gas will be transported in a pipeline to the Pluto LNG onshore processing plant located about 270 miles away. Located near Karratha in northwest Australia, Pluto has been open since 2012 and is scheduled to expand with a second train to support the new fields.

“Woodside is learning the hard way that the world is increasingly united in its desire to shift from dangerous, and expensive fossil fuels to clean energy sources like wind and solar,” said Jess Panegyres, Greenpeace Australia Pacific Head of Clean Transitions, who coordinated the protest with her German counterparts. 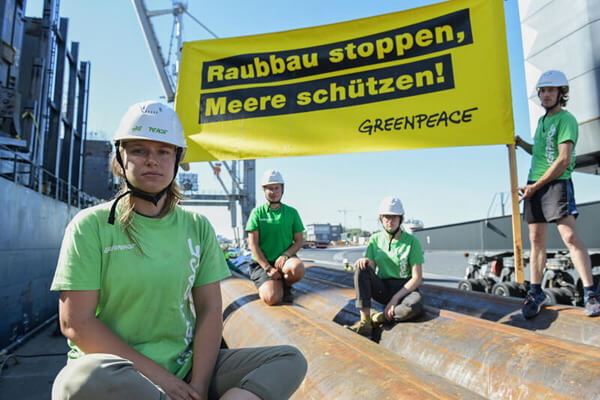 Greenpeace argues that the project poses a threat to Western Australia's diverse and sensitive underwater world with coral reefs and seagrass beds. They contend that the pipeline will pass directly through the migratory route of humpback whales and the protected Montebello Marine Park, an important breeding ground for sea turtles.

It is unclear from the report if the protestors were arrested, but the companies are saying the demonstration did not disrupt their plans. The Emma Oldendorff continues to load in Germany indicating she is due to reach Kabil, Indonesia on September 12.