After completing repairs to their cutting gear, salvors have resumed the process of separating the third segment of the wrecked ro/ro Golden Ray for removal and scrapping. The third cut passes through the vessel's engine room and is proving to be much more time-consuming than the previous two, with delays due to a connecting link breakage and wire rope replacement. The evolution is now entering its 32nd day.

Pre-cutting operations continue along the next several cut lines in the sequence in order to increase cutting efficiency, and the pre-cut method has been intensified: the team is now removing long strips of hull plating along the cut line, reducing the amount of material that the chain will have to rip through. 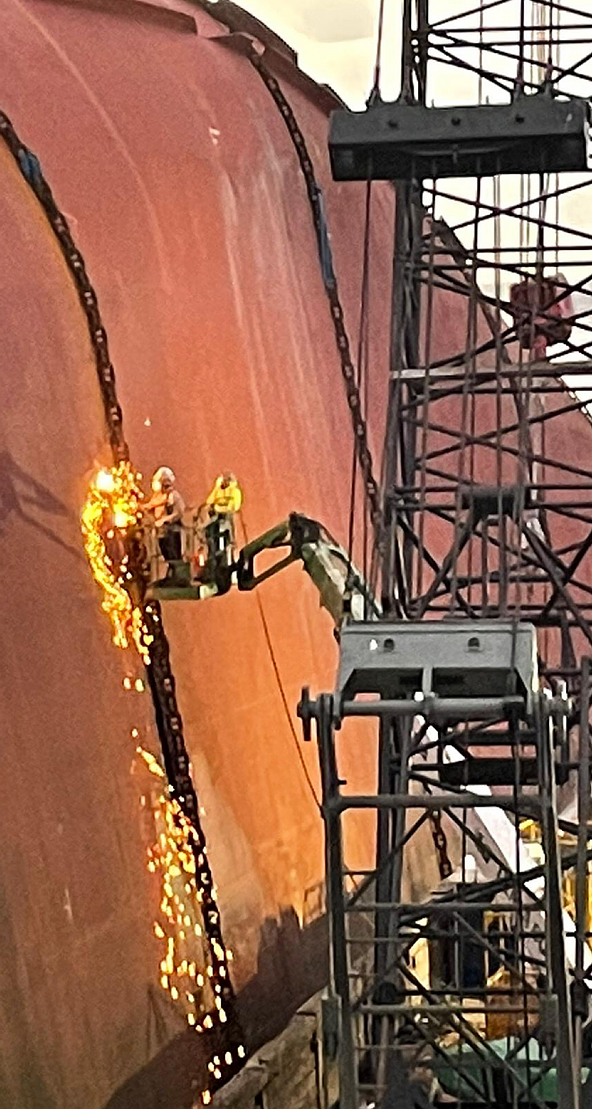 Responders use torches to remove strips of hull-plating along a projected cutline. Safety precautions include air monitoring and water misting with fire hoses connected to the deluge system. (St. Simons Sound Incident Response)

On the fourth section in the sequence - Section Two, the second back from the bow - salvors have finished removing about 100 wrecked cars and two movable deck sections, reducing the weight that the crane barge will need to hoist once cutting is completed.

The barge Julie B, which was used to remove and ship off the bow section, is still at a scrapyard in Louisiana where the segment will be dismantled. When the yard has finished removing the bow section from the barge, Julie B will be towed back to the wreck site to receive Section Two.

The spill response assets attached to the project continue to remove light sheening from the water around the site, and survey teams are assigned to find and remove pieces debris from the shoreline. There have also been several bird carcass recoveries in the area over the course of the past month, and the cause of the mortality is not yet known; as part of the project's wildlife monitoring and protection program, experts are evaluating the remains to determine whether the impact could be related.

The Golden Ray went aground and partially capsized in Georgia's St. Simons Sound on September 7, 2019. During an outbound transit in calm conditions, a routine turn to starboard turned into a runaway maneuver, ending with the vessel aground and resting on her side. Lt. Ian Oviatt, a staff engineer at the Coast Guard Marine Safety Center, told the NTSB that the vessel had taken on too little ballast for her cargo load. “The cause of the vessel capsizing was lack of righting energy due to the way the vessel was loaded,” Oviatt told an NTSB panel last September. “The vessel could have taken on additional ballast to be in compliance.”