Global Trade Growth Could Rebound in 2020

World trade will continue to face strong headwinds in 2019 and 2020 after growing more slowly than expected in 2018 due to rising trade tensions and increased economic uncertainty, according to the World Trade Organization (WTO). 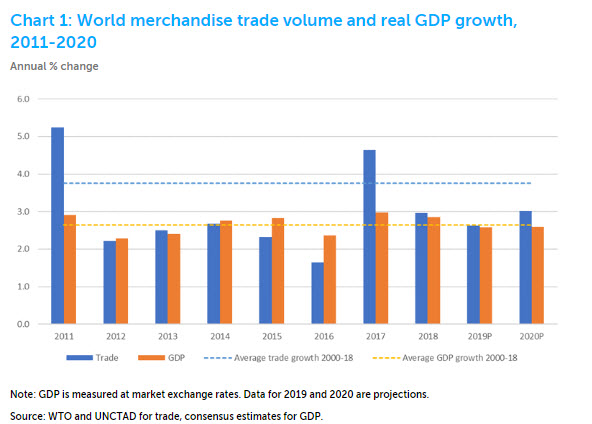 WTO Director-General Roberto Azevêdo said: "With trade tensions running high, no one should be surprised by this outlook. Trade cannot play its full role in driving growth when we see such high levels of uncertainty. It is increasingly urgent that we resolve tensions and focus on charting a positive path forward for global trade which responds to the real challenges in today's economy – such as the technological revolution and the imperative of creating jobs and boosting development.

“WTO members are working to do this and are discussing ways to strengthen and safeguard the trading system. This is vital. If we forget the fundamental importance of the rules-based trading system we would risk weakening it, which would be an historic mistake with repercussions for jobs, growth and stability around the world."

Trade growth in 2018 was weighed down by several factors, including new tariffs and retaliatory measures affecting widely-traded goods, weaker global economic growth, volatility in financial markets and tighter monetary conditions in developed countries, among others. Consensus estimates have world GDP growth slowing from 2.9 percent in 2018 to 2.6 percent in both 2019 and 2020.

Nominal trade values also rose in 2018 due to a combination of volume and price changes. World merchandise exports totaled $19.48 trillion, up 10 percent from the previous year. The rise was driven partly by higher oil prices, which increased by roughly 20 percent between 2017 and 2018.

There were few changes in export and import rankings among major traders in terms of U.S. dollar values in 2018. The fastest merchandise export growth in nominal terms was recorded by oil producers, including the Kingdom of Saudi Arabia (34.8 percent) and the Russian Federation (25.6 percent). Merchandise import values increased most for Indonesia (20.2 percent), Brazil (19.8 percent), China (15.8 percent) and Vietnam (15.4 percent).

The current trade forecast reflects downgraded GDP projections for North America, Europe and Asia, mostly due to macroeconomic considerations including the diminishing effect of expansionary fiscal policy in the U.S., the phase-out of monetary stimulus in the Euro area and the ongoing economic rebalancing of the Chinese economy away from manufacturing and investment and toward services and consumption. Monetary authorities have put further rate hikes on hold in response to soft economic data, but changes in monetary policy take some time to be felt. Trade measures announced in the past year are also reflected in underlying GDP assumptions but any additional ratcheting up of trade tensions is not factored in.

The impact of trade tensions on actual trade flows is difficult to quantify since it depends on the nature of any proposed measures and whether they are implemented or only threatened, says the WTO. Threatened measures can still have real effects by increasing uncertainty and discouraging investment.

WTO economists have attempted to quantify a worst case scenario. This would lead to a reduction in world GDP in 2022 of about two percent and a reduction in global trade of about 17 percent compared to baseline projections. For comparison, global GDP fell about two percent and global trade dropped about 12 percent in 2009 following the financial crisis.

Other risks to the trade outlook are more difficult to quantify. For example, the effects of Brexit will depend on the nature of any agreement that might be reached between the United Kingdom and the European Union, with impacts mostly confined to these economies. Lower investment in the U.K. is likely in most foreseeable Brexit scenarios, which would tend to reduce productive capacity over time.

Forward-looking trade indicators have turned negative in recent months, including the WTO's World Trade Outlook Indicator (WTOI). In February the WTOI index fell to 96.3, below its baseline value of 100, signalling slowing trade growth into the first quarter of 2019.