Germany is preparing to put its first ship powered by methanol into service to serve both as a research ship and provide a learning platform for students at the Alfred Wegener Institute which conducts polar and marine research. The 115-foot long cutter Uthörn is also prepared to participate in a pilot project planned for Bremerhaven to produce synthetic methanol to be used as a marine fuel.

The cutter is being built at the Fassmer shipyards in Berne and was recently christened by Germany’s Federal Minister of Education and Research Bettina Stark-Watzinger. Construction commenced two years ago on the unique vessel and it is expected to be handed over to the institute in December.

“Today’s christening represents a milestone on the road to sustainable infrastructure for marine research,” said Prof. Antje Boetius, Director of the Alfred Wegener Institute. “The Uthörn will not only support important research into the status quo of our coastal waters; I’m also proud to say that, with the new cutter, we at the AWI are assuming a pioneering role in replacing the use of fossil fuels in shipping.”

In launching the new vessel, the AWI notes that methanol is still a new fuel for the maritime industry and largely untested. Their goal is to demonstrate the potential of the fuel for the decarbonization of shipping. 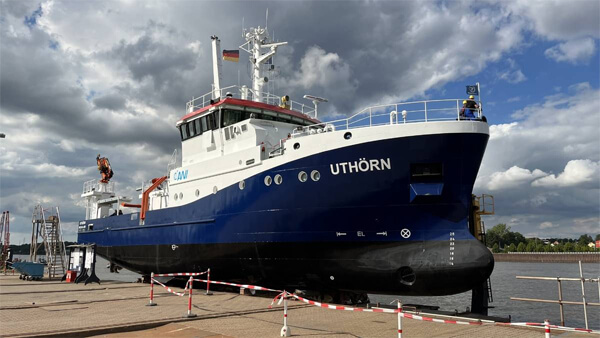 Harald Fassmer, Managing Director of the shipyard, noted that the construction of the vessel had helped to establish the path for methanol propulsion. He noted that when they received the order neither the relevant regulations nor the required permitting specifications for the planned drive-system components were available. The project, he explained, led the way in the implementation of the propulsion systems.

To power the vessel the builders modified two diesel engines. They will have a combined output of 600 kW providing power to the vessel’s two electric motors. Among the research facilities provided aboard the vessel is a large working deck with dry and wet laboratories. The Uthörn also features two derrick booms for trawling nets and water samplers, a multi-frequency echosounder for detecting and identifying schools of fish, and an anti-roll tank, which can stabilize the ship on choppy seas.

When the vessel is commissioned, she will be replacing an older 98-foot cutter that had been in service since 1982. In her role, she will become a coastal research platform and also conduct cruises on the North Sea to permit students to familiarize themselves with the heavy gear used in the research field. 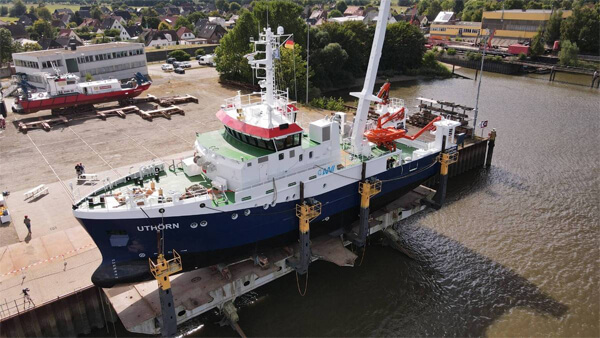 As a next step in the program, working together with Bremerhaven-based partners from research and industry, the Alfred Wegener Institute, Helmholtz Centre for Polar and Marine Research (AWI) has prepared a proposal for a synthetic methanol production facility in Bremerhaven. The pilot project, which the institute says could be approved by the end of the year, would use renewable electricity from a wind turbine to split water into hydrogen and oxygen via electrolysis. In the next step, this “green” hydrogen and CO2 from a nearby sewage treatment plant could be used to synthesize “green methanol,” which, when burnt, would only release the amount of CO2 that was captured during its production.

During the christening event, the Minister of Education and Research said the new vessel is setting the standard as the first German seagoing vessel with methanol propulsion. She congratulated AWI and Fassmer on the innovative vessel which will be an important contribution to the state-of-the-art research fleet and serve as a model for the future of the maritime industry.