A U.S.-Georgian consortium has been awarded a $2.5 billion contract to build and develop a deep-sea port in Anaklia on Georgia's Black Sea coast, as the tiny ex-Soviet republic sets eyes on lucrative cargo transit from Asia to Europe.

The Anaklia Development Consortium is a joint venture of Georgia's TBC Holding LLC and Conti International LLC, a U.S.-based developer of infrastructure and capital projects, Georgia's Economy and Sustainable Development Ministry said in a statement on Monday.

The government of Georgia, which initiated the project, has committed to invest $100 million in ensuring its success.

The consortium, selected in a tender, aims to start the construction of the port by the end of 2016 and finish it in three years. The port will have the capacity to berth 10,000TEU container ships and to process up to 100 million tons of cargo per year upon completion.

"We are looking forward to breaking ground and working with the government of Georgia to help forge new paths from Asia to Europe as well as unlocking the economic potential of Georgia's neighbors," said Kurt Conti, Conti International's CEO and president, was quoted as saying in the ministry's statement. 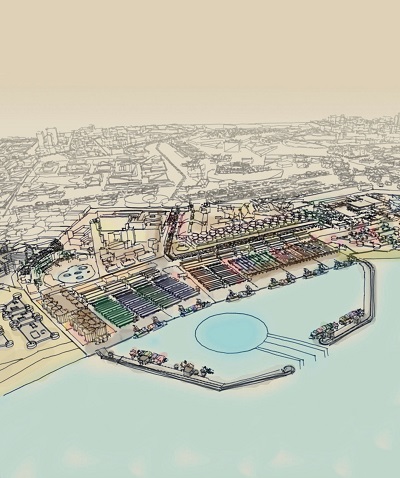 The consortium is expected to raise investment from international financial institutions and port operators who will be selected within the next six months, the Economy Ministry said.

The Anaklia Development Consortium was also awarded the right to develop a free industrial zone on about 600 hectares of land adjacent to the port.

Located on the eastern edge of the Black Sea, Anaklia strategically sits on the shortest route from China to Europe. The route has recently become a focal point for $40 billion in Chinese infrastructure investments under the Silk Road Development Fund and already accounts for 26 percent of Chinese foreign trade volume.

The recent opening of the $100 billion Asian Infrastructure Investment Bank will also support regional infrastructure development. The restoration of the Silk Road has been a major priority for Georgia as well and builds upon the government’s Deep and Comprehensive Free Industrial Agreement with the European Union in December 2014.

Mamuka Khazaradze, Founder and President of TBC Holding and Founder and Chairman of TBC Bank JSC, said: “The Anaklia project represents a one-of-a-kind investment in the restoration of the Silk Road that will pay dividends for generations of workers in Asia and Europe. The government of Georgia deserves much credit for its foresight in initiating this project and ensuring it receives the support necessary for its completion. Their level of commitment clearly reflects the port’s tremendous economic importance to the country and the region.”

Two other Black Sea ports in Georgia - Batumi and Poti - are capable of handling only feeder vessels, carrying a maximum of 1,700 containers.

Larger Panamax size vessels with Georgia-bound cargo use other ports in the region, mostly Turkey's Istanbul, where containers are reloaded to feeder ships which then are transported to Poti and Batumi.

In 2014 container throughput of Georgian ports increased by 18.5 percent year-on-year to 480,000 TEUs of which 80 percent was handled by the country's largest port in Poti.

With the reports of dramatic increases in the number of attacks on vessels in the Gulf of Guinea, security services issued warnings when a tanker went missing this week with its reporting devices turned off. Analysis and the media feared the worst that the vessel had been hijacked or the crew kidnapped, and even now with reports that the crew is safe the circumstances of the events remain uncertain. Reports indicated that the 16,700 DWT tanker Errina registered in Panama...