The French Navy seized a Brazilian vessel carrying over 4.6 tons of cocaine worth an estimated $157.8 million (street value set at over $360 million) as part of a multi-national operation off the African coast. Europol announced the successful operation as the latest in an ongoing effort to disrupt the steady steam of narcotics flowing from South America to Europe.

The interception by the French Navy came as a result of intelligence activities underway between Europol, Maritime Analysis and Operation Centre – Narcotics (MAOC – N), and the authorities in Brazil, France, the United Kingdom, and the U.S.

Reports indicate that the authorities were tracking the movements of the approximately 70-foot long vessel registered in Brazil since it departed South America. They believed its final destination was in Europe, but the authorities decided to seize the vessel while it was approximately 400 miles off Sierra Leone. 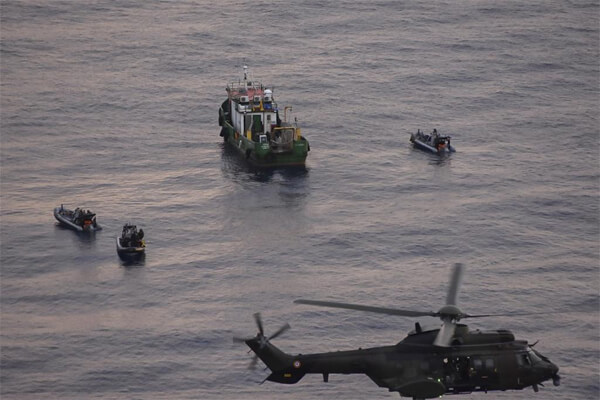 The French amphibious assault carrier Tonnere was assigned to make the seizure which took place on November 30. Pictures show the French team launching the operation with multiple Zodiac boats surrounding the Brazilian-flagged vessel while helicopters circled overhead. After boarding the vessel, the French team discovered several bales of cocaine that were destroyed. The Brazilian nationals aboard the ship were taken into custody.

“An investigation is underway to identify the criminal groups involved on either side of the Atlantic Ocean,” said Europol in a statement.

The seizure, the latest in a series of drug confiscations mainly from South America to Europe, came just a week after coordinated raids were carried out across Europe and the United Arab Emirates targeting both the command-and-control center and the logistical drugs trafficking infrastructure in Europe. Law enforcement agencies managed to seize more than 30 tons of cocaine linked to the group over the course of the investigation and arrested a total of 49 suspects.

So far this year, the MAOC-N partner countries report that they have seized over 15 tons of cocaine from operations coordinated through the Centre. This includes operations extending from Senegal/Cape Verde to the Gulf of Guinea.