More than four years after she was first delivered, the futuristic destroyer USS Zumwalt has conducted her first live-fire SM-2 missile test. The exercise is a step towards gaining Initial Operational Capability (IOC) certification, which is expected sometime next year.

The SM-2 (Standard Missile-2) is the Navy's workhorse anti-aircraft missile, and it has a secondary anti-ship role. Zumwalt is fitted with 80 VLS cells for SM-series missiles, Tomahawk cruise missiles and other munitions - 16 cells fewer than found aboard the Arleigh Burke-class destroyer series, which is 100 feet shorter and 6,000 tons lighter.

Zumwalt's unique cannons were not part of the test, as the Navy has not yet found a practical and economical means to supply them with ammunition. The Zumwalt class was originally envisioned as a 32-vessel series, and the cannon was designed to take a purpose-built ammunition round. However, the class was gradually scaled back to three hulls due to budgetary considerations; the cost per round for a correspondingly smaller quantity of ammunition went up to nearly $1 million per shot. The Navy opted not to move forward with acquiring a supply of the ammunition due to the excessive price per unit, and the cannons have not been used. 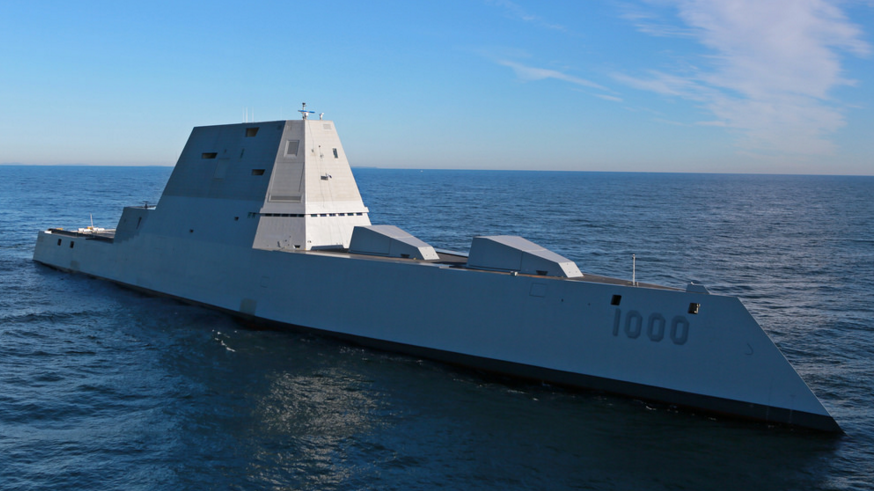 While her deck guns are silent, Zumwalt has other features that the Navy believes will be useful in a future conflict. Thanks to her unusual shape and her composite deckhouse, she has a very small radar cross-section, and that allows her to take on the "appearance" of a much smaller vessel for opponents' radar surveillance systems. She was also designed with power and weight margin built in for future, as-yet-undeveloped energy weapons systems like high-power lasers or railguns.

“Today’s successful firing event is a critical milestone in the maturation of this incredible ship class and represents the culmination of a tremendous amount of hard work,” said Capt. Gary Cave, Zumwalt’s commanding officer. “It is a day we’ve been looking forward to and demonstrates the strides we are taking to add combat capability to our surface force.”

Two more Zumwalt-class vessels are currently undergoing construction at Bath Iron Works. When including R&D costs for the scaled-down series, the total cost per vessel is approximately $7.5 billion.