Increased tariffs on U.S. and Chinese goods trade may result in decreased traffic at certain U.S. ports, says Fitch Ratings, but they are not likely to be similarly affected in the medium term.

The landlord-based operating model at many of the more exposed west coast ports have contractual minimums that provide a floor for revenue should volume declines worsen. Imports, which make up the largest share of volumes at many of the ports with higher exposure to Chinese trade, have thus far been resilient to the imposition of tariffs, though the risks to volumes will rise if trade protectionism is prolonged.

On May 10, the U.S. escalated the on-going trade war by increasing existing tariffs from 10 to 25 percent on $200 billion of imports from China. China's corresponding increase of 20 or 25 percent on approximately $60 billion of U.S. goods was announced on May 13. The new Chinese tariffs will take effect on June 1, assuming that negotiators do not reach a deal beforehand. The restrictions cover more than 4,000 categories of exports, from spare parts to agricultural commodities.

Shortly after the Chinese announcement, the Office of the U.S. Trade Representative formally proposed a new 25 percent tariff on 3,800 product categories, covering essentially all of the remaining Chinese goods that have not yet been hit by American tariffs. It contains exclusions for pharmaceuticals, some pharmaceutical precursors, certain medical goods, rare earth elements and critical minerals. Product exclusions that were previously granted by the administration are not affected and remain in effect. The proposed list has an annual value of roughly $300 billion.

Fitch reports that volume data show some ports are feeling more of an effect than others, particularly when looking at U.S. export volume as measured by loaded outbound TEUs. Of the larger west coast, east coast, and Gulf of Mexico ports, there is a levelling off or decline in loaded exports, other than Port of Houston, since tariffs were put in place in January 2018. This trend worsened in second-half 2018 onward as additional tariffs went online in June and September. 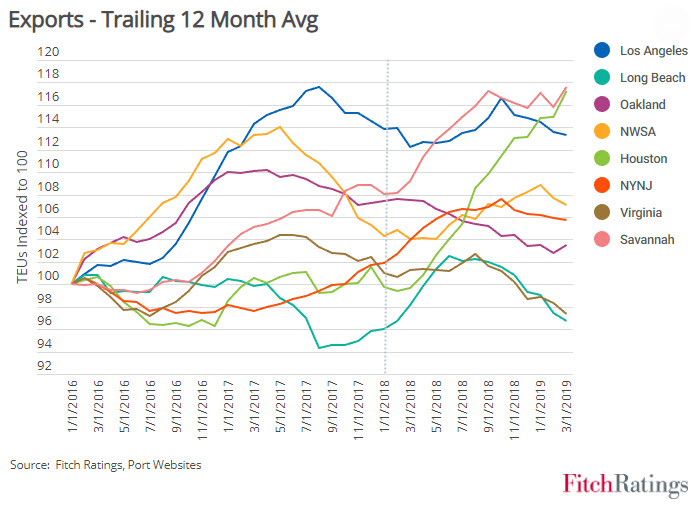 Empty container numbers are rising by double digits, partly due to a catch-up effect as shippers reposition containers back to Asia after the tariff-driven rush in fourth-quarter 2018 led to congestion for many west coast ports.

The U.S. imported $450 billion of goods from China in 2018. In contrast with exports, all Fitch-rated ports continue to see volume increases in loaded imports since tariffs were introduced in January 2018, although with stronger growth for east coast and Gulf ports. As U.S. imports from China tend to be made up of higher value cargo than exports, and comprise roughly 70 percent of loaded cargo for the Port of LA, Long Beach, and PANYNJ , and 50-60 percent for some other ports, the revenue effect of a decline in export cargo will likely be muted, reports Fitch. Any long-term imposition of higher tariffs would result in lower U.S. consumer demand, which would reduce U.S. imports and curb trade volumes beyond 2019.

“Shifts in production centers may be exacerbated by ongoing trade turmoil with China. This trend, already underway, has the potential to more permanently affect port cargo levels and shipping route decisions,” says Emma Griffith, Senior Director at Fitch Ratings. Depending on where goods are produced, all-water routes via the Suez Canal may become comparatively more cost-effective for importing goods to the U.S. compared with traditionally dominant transpacific routes.

The WTO and shipping industry organizations have voiced concern over the trade war.