The Fisheries Survival Fund, which represents the majority of the limited access Atlantic scallop fleet, is the lead plaintiff in a lawsuit seeking to delay an anticipated lease sale for the development of offshore wind farms off New York.

A 26-mile long block approximately 11 miles off the coast of Long Island is scheduled for sale on December 15, 2016.

The Fund argues that the Bureau of Ocean Energy Management (BOEM) did not adequately consider the impact the proposed New York Wind Energy Area would have on the region’s fishermen. The site chosen is in the waters of the New York Bight on vital, documented scallop and squid fishing grounds, which serves as essential fish habitat and grounds for other commercially important species, including black sea bass and summer flounder. It is also an important foraging area for threatened loggerhead sea turtles and critically endangered North Atlantic right whales.

The lawsuit argues that fishermen voiced their concerns but received “virtually no attention or analysis” from government officials. It further states that BOEM failed to identify the proposed wind farm’s environmental, economic, social and cultural impacts, and failed to “consider alternative sites in an open, collaborative, public forum.”

However, BOEM says it has given consideration to comments received on the Environmental Assessment. In response to concerns raised by commercial fishing interests, BOEM has included a lease requirement for the lessee to develop a publicly available Fisheries Communications Plan and work with a Fisheries Liaison to facilitate communication with the fishing industry.

BOEM also removed about 1,780 acres from the lease area due to environmental concerns regarding a seafloor feature known as the Cholera Bank. In a comment letter, the National Marine Fisheries Service identified the Cholera Bank feature as a sensitive habitat to be avoided for the placement of structures.

“New York is a critical component in building a robust U.S. offshore wind industry,” said BOEM Director Abigail Ross Hopper. “The process to develop and refine the New York lease area, as well as the online auction, reflects the deep commitment BOEM has to listening and responding to stakeholders and ensuring that all voices are heard as we forge a path to a clean energy future.”

To date, BOEM has awarded eleven commercial wind leases, including nine through the competitive lease sale process. These lease sales have generated more than $16 million in winning bids for more than a million acres in federal waters.

The complaint is available here. 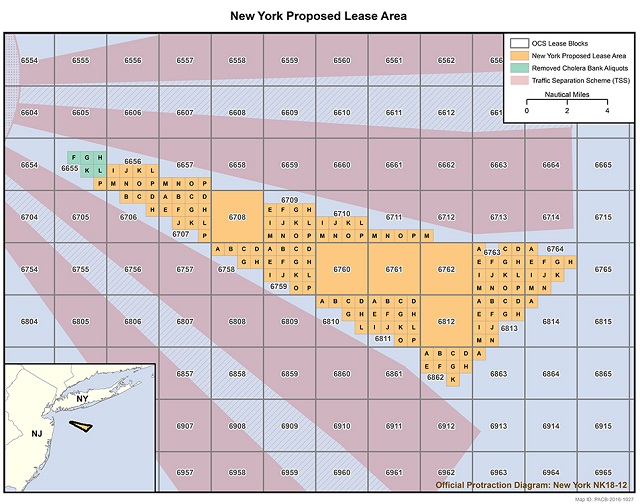