While the commissioning of individual offshore wind farms is happening with increasing regularity, the new Kaskasi offshore wind project being developed by Germany’s RWE has the distinction of being the first wind farm to use recycle blades developed by Siemens Gamesa. The installation of the first blades was recently completed at the North Sea wind farm and the first turbines have begun to generate electricity.

Wind turbine blades are made up of a combination of materials embedded in resin to form a strong, stiff structure. Until now, according to RWE, the composite materials used in wind turbine blades have been more challenging to recycle. The resin system employed in the manufacture of the blades binds all the components together, making it more difficult to effectively recycle the materials. While many components of a wind turbine already have established recycling practices, the companies have been searching for solutions for the blades. Currently, several companies have committed to stopping the dumping of worn-out blades and instead storing them until they can be recycled.

Siemens Gamesa announced 10 months ago plans to offer a blade that would be recyclable. The company is marking the roll-out of the new technology which is now available for several lengths of blades, including the 265-foot blades at Kaskasi as well as the longer 354-foot and 377-foot blades used with the 14MW turbine.

Siemens Gamesa developed a technology that enables full reclaim of the blade’s components at the end of the product’s lifespan. Separating the resin, fiberglass, and wood, among others, is achieved through using a mild acid solution. The materials can then be reused in the production of other products, such as suitcases or flat-screen casings without the need to call on more raw resources the company says.

“That we are testing in our offshore wind farm Kaskasi the world’s first recyclable wind turbine blades under operational conditions is a significant step in advancing the sustainability of wind turbines to the next level,” said Sven Utermöhlen, CEO Wind Offshore at RWE Renewables. The first turbine equipped with Siemens Gamesa’s RecyclableBlades is generating electricity, he noted after its installation in July. 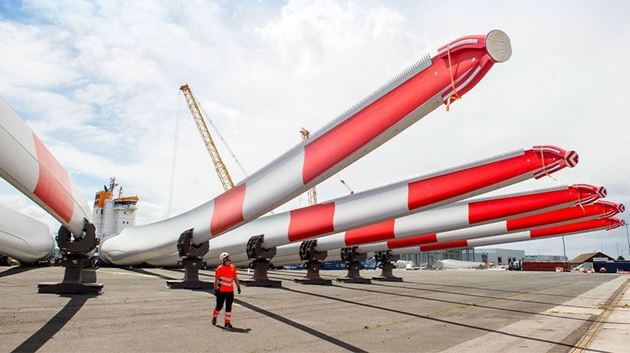 Siemens Gamesa, which notes that it is targeting fully recyclable turbines by 2040, called it a milestone for the offshore industry. The blade technology was developed in Aalborg, Denmark, while they were manufactured in Hull, UK. The nacelles were produced in and installed from Cuxhaven, Germany.

To be located more than 20 miles north of the island of Heligoland in the North Sea, nine of the 38 9MW turbines scheduled for the site have been installed. When fully operational by the end of 2020, Kaskasi will be generating 342 MW of energy able to power up to 400,0900 German households. It is the sixth wind farm off the coast of Germany that RWE is developing and the company is committed to expanding its use of recyclable components at all of its farms.