Sea trials recently began for the Stena Pro Patria, the first methanol-powered dual-fuel tanker constructed in China. Built by Guangzhou Shipyard International the vessel is the first of six 49,990 dual-fuel tankers designed to use methanol being built by the shipyard and are being billed as an advancement for methanol-fueled propulsion. Over the next few years, methanol is expected to expand rapidly as Maersk introduces the first large containerships designed to run on the alternative fuel and x-Press Feeders has ordered up to a dozen smaller containerships also operating on methanol.

Proman Stena Bulk, a joint venture between Sweden’s Stena Bulk AB and Switzerland’s Proman became the first of the new generation of shipping companies to order methanol-fueled vessels. Initially, they ordered two vessels and then expanded the order to three, while Proman later independently ordered three additional tankers all using the same design.

All the vessels are being built by Guangzhou Shipyard International (GSI) with the other two ships for Proman Stena Bulk also currently under construction. The Stena Pro Patria is expected to be delivered shortly, while her sister ships, Stena Pro Marine and Stena Prosperous, are also due to be completed this year. Each of the vessels will be 610 feet long with a 105 foot beam. 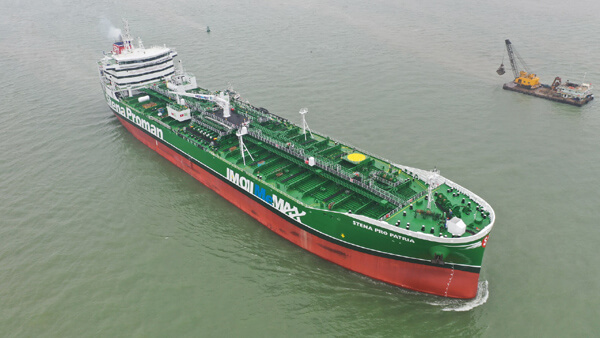 GSI vice president William Zhou hailed the start of sea trials and testing of the propulsion equipment as “a watershed moment” in the development of methanol as an alternative fuel for MR tankers. He said each tanker will significantly slash NOx emissions by using each year around 12,500 tons of methanol as a marine fuel. The vessels are powered by a MAN dual-fuel 6G50ME C9.6 engine, without catalyst conversion.

“We are very proud to see the first ship in this ground-breaking fleet begin sea trials,” said Zhou. “We won the contract under stiff competition from Korea and this ship shows what GSI is truly capable of building on our experience of building 30 dual-fuel vessels. The construction of the Stena Pro Patria is a massive achievement for all parties involved and I would like to thank Proman, Stena, our team, MAN engines as well as the class society DNV for all they are doing to make this bold ship design and fleet a reality.”

“Methanol has the benefit of being widely available already near many ports worldwide having being shipped for decades,” said Zhou. “Moreover, bunkering of methanol, as an ambient temperature liquid fuel, is similar to distillate fuel so can be used in existing bunkering facilities with relatively few upgrades.  He expects that the use of methanol will grow due to properties that make it no more dangerous than diesel and is less hazardous to the environment than diesel or HFO biodegrading rapidly in the event of a spill.