The approximately 143,500 gross ton cruise ship, which measures 965 feet in length, is the first built for the cruise line by Fincantieri. It combines a prototype project developed by Fincantieri while also incorporating the features of NCL’s signature style designed for freedom and flexibility. In addition, according to Fincantieri, the focus was set on energy efficiency, with the twofold aim of optimizing consumption at sea and reducing environmental impact, compliant with all the most recent regulations on this matter.

The ship is propelled by two 16.5 MW pod propulsion units. Fincantieri reports it exceeded contract speed reaching a maximum of 21.9 knots during sea trials. The unique hull design also incorporates the straight bow form reintroduced to cruise ships in the past few years. 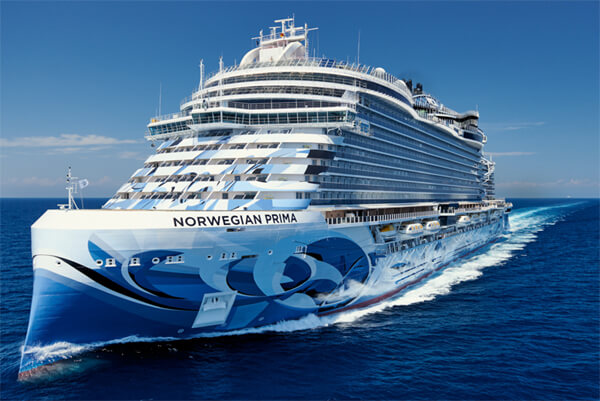 “It’s a proud day seeing the first of the six Prima Class vessels delivered,” said Luigi Matarazzo, general manager of the Merchant Ships Division of Fincantieri.  “Norwegian Prima is packed with world-firsts, never-before-seen features, and extraordinary attractions you would never expect at sea.”

Among the features that Norwegian is highlighting for the new ship is that she is the most spacious ship in the company’s fleet, with the highest passenger space ratio (number of passengers to gross tonnage). According to company executives they sought to create a ship with the look and feel of the premium category elevating the experience on a contemporary brand cruise ship.

The Norwegian Prima features 1,646 passenger cabins accommodating 3,215 passengers (double occupancy) and a maximum of 5,400 people aboard including 1,388 in crew. The wide-open spaces include 44,000 square feet of deck space with an “infinity beach” that features two infinity pools located near the water on the main outdoor promenade deck. The ship has 12 outdoor bars and lounges including a first-of-its-kind open-air food hall. There are a total of seven specialty (extra fee) and six complimentary dining options including a restaurant reserved for suite guests.

Among the unique amenities the cruise line incorporated into the design of the vessel is the largest, and first, three-level racetrack for electric race cars. It stretches nearly a quarter of a mile with top speeds of nearly 40 mph. There is also the first freefall dry slide plunging 10 stories down the side of the ship and for a tamer experience an outdoor sculpture garden.

"Today we usher in a thrilling new era in cruising as we celebrate the delivery of Norwegian Prima, the long-anticipated first ship in our extraordinary new Prima Class,” said Harry Sommer, president and CEO of Norwegian Cruise Line. “She is a true testament to our Guest First philosophy. We thank our wonderful partners at Fincantieri, whose coveted craftsmanship, expertise, and dedication, helped bring Norwegian Prima to life."

Norwegian Cruise Line announced the next generation of ships in 2017 originally with an order for four ships in Project Leonardo that was later expanded to six cruise ships. The Norwegian Prima enters service in August with a christening in Iceland followed by cruises in Northern Europe, before repositioning for cruises from the United States to Bermuda and then spending the winter in the Caribbean. Her sister ship, Norwegian Viva is scheduled to enter service in the summer of 2023.

Norwegian recently announced to investors that it has expanded the design for the later four ships of the class to become the Prima Plus Class. While full details have not been announced, the vessels will be enlarged increasing the passenger capacity to approximately 3,550 guests (double occupancy). The first of the expanded class is due for delivery in the fourth quarter of 2024, followed by sister ships in the third quarter of 2025 and 2026. The final ship of the class is scheduled for delivery in the second quarter of 2027. 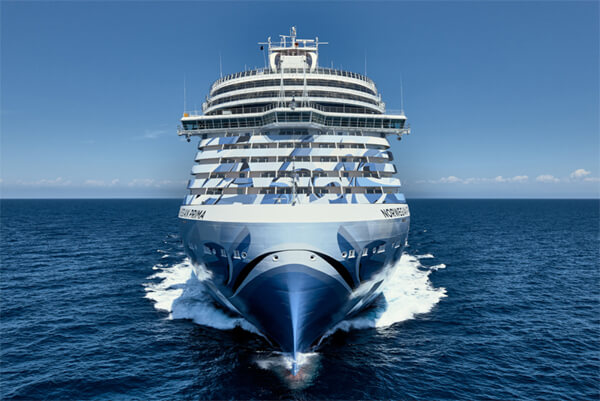