In the latest large container ship news, MSC has indicated that it is interested in ordering ten ships of 11,000 TEUs at around $80 million each for the North-South trades. The vessels, expected to be delivered from Hanjin Heavy Industries in 2017, are far from the size of the latest mega-ships such as the company’s 19,224-TEU MSC Oscar and CSCL’s 19,100-TEU CSCL Globe.

This size of vessel has been ordered for two reasons: The volumes of cargoes differ in the North-South trades, and the terminals in such trades are far from ready to handle much larger vessels. 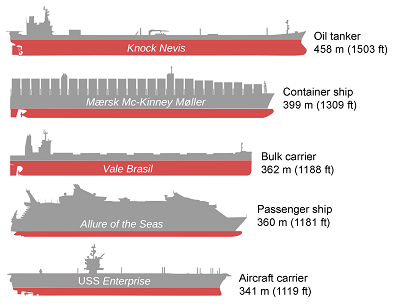 The CSCL Globe held the title of the world’s biggest container ship for just 53 days before MSC Oscar entered the trade, and these vessels have been stealing the headlines. But the potential impact of their design capacity on the container market can be overstated, says Theodor Strauss, a past guest lecturer for the STC Group Master Course in Rotterdam and South Korea and former Managing Director of K Line (Nederland). Nominal TEU is the (theoretical) number of containers a ship should be able to carry if all the containers are empty and the same size and if the vessel is only sailing between two ports.

Strauss, citing industry analysts Dynamar, says that the factors reducing the actual number of containers carried can vary by trade and include such things as draft restrictions, stowage requirements, the need to move containers between various ports and deadweight constraints. Other factors affect deadweight. For example, the amount of bunker, lubricant and other supplies on board can account for around 15 percent of the ship’s capacity by deadweight.

Brokers list TEU capacity at 14 tons homogeneous load, says Strauss. “This is the maximum load capacity in terms of filled TEU with an average 14-ton total weight. Information on true container ship capacities is commercially sensitive, but it may be several thousand TEU different. This makes quite a difference to the practical capacity of any container ship.”

For those believing that Maersk Line’s 18,270-TEU Triple?E class ships can actually be filled up to design capacity, says Dynamar, the carrier’s flagship Maersk McKinney Møller recently left Algeciras with 18,168 TEUs on board. “The ship was on its way to the Far East filled with many (if not mostly) empty boxes. Otherwise its deadweight (195,000 tons) would not have been sufficient to load all these boxes. The average gross weight per full TEU to the Far East from Northern Europe stands at around 14.2 tons (working out at 258,000 tons, excluding bunkers and supplies).”

Despite this, Strauss says that shipping remains by far the most energy-efficient form of transport. He cites IMO research that demonstrates that energy consumption of road transport by truck lies in the range 0.7 to 1.2 Megajoules/ton-km. By comparison, the consumption of a medium-size container ship at 18.5 knots is about 0.12 Megajoules/ton-km.

Dynamar reports that Seaspan, an owner that doesn’t operate ultra-large container ships, doesn’t think ships of 18,000 to 20,000 TEUs will become the 747s of shipping, arguing that their deployment will remain restricted to a limited number of ports on the Europe-Far East run. It is convinced that they are missing the flexibility of the 10,000/14,000-teu range of container ships that have developed into the workhorses of an increasing number of liner trades.

As an analyst, Strauss also mentioned the size of the new locks in the enlarged Panama Canal: Roughly 13,000-TEU vessels will be the limit to transit the canal.

Despite this, the number of mega-ships continues to grow. Drewry reports that the total capacity of ships 18,000 TEUs and above, either active or on order, has now passed the one million TEU mark. MSC Oscar is expected to be joined by sister ship MSC Oliver in April, but the vessels’ size record won’t last long. MOL has recently commissioned six 20,150-TEU ships.