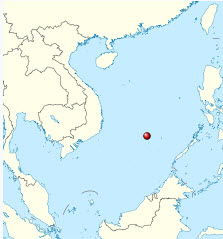 Sandy Cay is 4.6 kilometers (nearly three miles) away from a Pag-asa Island (Thitu Island), a Philippine-claimed island and one of the 10 islands of the Spratlys. There are currently 100 Filipinos residing on Pag-asa Island. Sandy Cay has become permanently above water at high tide because of China's dredging at nearby Subi Reef, says Carpio.

"Sandy Cay is a Philippine land territory that is being seized (to put it mildly), or being invaded (to put it frankly), by China," he said. "If China acquires sovereignty over Sandy Cay, it can now claim Subi Reef as part of the territorial sea of Sandy Cay, legitimizing China's claim over Subi Reef and removing Subi Reef from the continental shelf of the Philippines," Carpio said.

Meanwhile, the Asia Maritime Transparency Initiative has showed photos taken on August 13 depicting the presence of 11 Chinese ships near Pag-asa Island. One possible explanation for the flotilla’s sudden and provocative appearance, says the Initiative, is that Beijing wanted to dissuade Manila from planned construction on Sandy Cay. The Philippine government has said it plans to spend about $32 million on upgrades including a beaching ramp, desalination facilities and repairs to the islet’s crumbling runway.

“And if the Chinese navy will attack our Philippine Navy then the government can invoke the 1951 US-Philippine Mutual Defense Treaty,” Carpio said. This is an agreement between the U.S. and the Philippines signed in Washington that stipulates that both nations would support each other if attacked by an external party.

When Philippine lawmakers asked Cayetano about the presence of naval ships at Pag-Asa, he said the situation on the island is stable. Neither Duterte nor Cayetano have voiced any serious concern about the presence of Chinese vessels in the area. Duterte is felt to have taken a soft stance on China, announcing last year that he is realigning himself with the nation.

The U.S. government recently gave the Philippine government two new Cessna 208B reconnaissance aircraft worth $33 million to be used for maritime surveillance in the West Philippine Sea. Moreover, the U.S. embassy also announced that it would be turning over a tethered aerostat radar system (TARS) to the Philippine Navy to enhance its maritime intelligence surveillance capabilities.