The European Union is funding the construction of the first mid-size 100 percent electrically powered car and passenger ferry. The ferry will be powered by the largest battery pack installed on a ferry to date.

The zero-emission ferry will be powered by wind-sourced electricity, and the large battery pack will give a high charging capacity, allowing for short port stays. It is expected to be operational by 2017 and will link Aero Island to mainland in Denmark carrying 130 passengers and 40 vehicles and saving 2,000 tons of CO2 per year.

The island is situated in the Baltic Sea in Denmark’s south, and the ferry will be capable of working all day on routes from nine to 13 nautical miles long using electricity already available on the island.

The vessel’s engine room will be almost non-existent. Instead the ferry will carry two independent battery packs delivering a total of 3,800 kWh. Combustion engines and associated tanks and piping won’t be required, but the battery packs will add around 51 tons to the vessel’s weight.

Two electric motors of 750 kW will give the ferry a speed of up to 15.5 knots, greater than most island and inland waterway ferries, which typically travel at speeds of 9-13 knots.

According to project partner Tuco Marine, the energy efficient design will reduce energy consumption by approximately 50 percent compared to existing ferry designs. Existing state-of-the-art ferries with 100 percent electric drive train systems are suffering from major limitations in range and are thus only being built and applied for very short ferry connections.
The e-ferry project aims to overcome this limitation by building and demonstrating a ferry suitable for medium range connections.

As part of its responsibilities, Tuco Marine will be providing lightweight composite structures for the superstructure of the ferry which will ensure the lowest possible weight of the vessel.

The newbuilding cost of an e-ferry is expected to be about 33 percent more than a conventional ferry, and a further 15 percent is required for the necessary land installations. Reduced operational costs are expected to compensate for this. The total savings are anticipated to be 15-20 percent compared to the islands existing ferry operations. 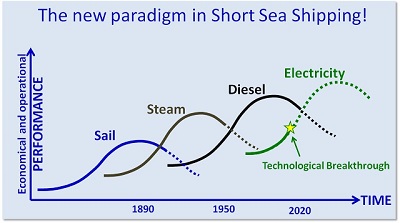 The ferry is designed for coastal routes and inland waterways and the hull shape is optimized for low energy consumption and improved speed in confined waters and at restricted depths. The design will the ferry service to operate all year around in harsher weather conditions than the present ferry on the route, and travel time is expected to be reduced up to 25 percent.

A Market for Thousands of Ferries

A market analysis published earlier in the year indicated the potential for thousands of green ferries. The report indicates that three Scandinavian countries have the potential for conversion of almost 200 domestic ferries within the next decade provided that infrastructural changes to the electricity grid is paid for by public investments.

If these results were extrapolated to all European coastal countries, a future market of more than thousand electrically operated ferries is anticipated.

The e-Ferry project is being run by Denmark, Greece and Norway with EU funding of 16 million euros ($18 million).

The e-Ferry project is one of 75 research and innovation projects which will receive EU funding under the Horizon 2020 challenge to create smart, green and integrated transport.