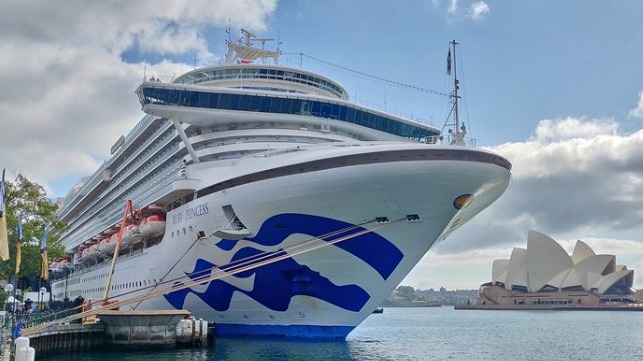 Fire, Explosion Aboard Car Carrier at Port of Jacksonville

With global trade down sharply due to the coronavirus pandemic, container traffic volumes have fallen by double-digit percentages at many seaports. The top ocean carriers are suspending entire service loops, returning chartered vessels and idling a significant portion of their global fleets. The entire ocean freight industry faces unprecedented headwinds - and these challenges affect containers on the ground as well.

It isn't possible for the general public to track container movements in real time, but some stakeholders have a good view into patterns and trends. Chassis pool operators know when a chassis leaves a terminal with a box and when it comes back, and the dwell time gives a view into what is happening with the average container. (Only a small minority of chassis are fitted with GPS trackers, so more granular usage data is harder to come by.)

According to Mike Wilson, the CEO of gray chassis pool manager Consolidated Chassis Management (CCM), fewer chassis are in use now - but the average length of time that a container stays on the chassis is getting longer. This may well be a reflection of the large number of cargo owners who can't receive and process their cargo due to the lockdown.

"We're pretty close to an all time utilization low, running at about 52 percent. But for the chassis that are in use, we're seeing a steady rise in the on-street dwell time from about four and a half days upwards to ten days right now, and some locations in the interior are beyond that. So that's telling us that the cargo is being sent out of the facility, but the container is not being unloaded, it's sitting somewhere," says Wilson.

For now, this is not an operational challenge, since demand is so low - but when cargo volumes return, Wilson cautions that this situation could lead to chassis shortages. "These chassis get absorbed, but they're not being turned, they're being used as temporary storage," Wilson says. "The more chassis that are stuck under boxes, the fewer chassis there are at terminals and ready to move cargo. We're working with cargo owners and letting them know that if they don't need the cargo, they should make other arrangements so that they don't tie up that chassis."

As to when that volume bounceback happens and how big it might be? That is a more challenging question. "The big question mark is, is the lost cargo volume going to come back on top of normal volume once the business restrictions are lifted? Most people are saying they really don't know. Particularly given the slowdown in the economy and the ramp-up time it's going to take to get things going again, then consumers - who drive trade volume in the U.S. - may be reticent to spend," says Wilson.

With fewer boxes in transit and more being used for storage, ocean carriers and shippers also have to contend with disruption in empty container availability. Some ocean carriers have resorted to unusual repositioning moves - like MSC's recent ULCV deployment to the U.S. West Coast - in order to take excess accumulations of empties to the geographic markets where they are needed.

“We're still in a situation where we have significant equipment dislocations. Blanked sailings have reached an all-time high as carriers prepare for a sharp drop in demand. With carriers reducing capacity to match demand, this has resulted in equipment imbalances and network disruption in some areas," says Greg Tuthill, chief commercial officer of Seacube Container Leasing. "Right now, the biggest concern is cargo being held at the ports due to retailers, BCOs or consignees not having the space to receive cargo give the lockdowns. This is taking place in the U.S. ports and Europe for the most part, but it's going to probably cascade into other areas as well."

This backlog is visible in Germany, where logistics software firm Setlog says that its fashion retail customers are looking hard for off-site storage solutions for unneeded boxes. Warehouses are growing full, creating new demand for offsite container storage and a disincentive for BCOs to pick up their import boxes at ocean terminals. Drayage times for German clothing imports have doubled, up from six days to twelve days year-on-year, Setlog says.

SeaCube's Tuthill says that going forward, carriers are starting to be more conservative about container fleet replacement and expansion given the downturn in demand. The need for reefer containers - SeaCube's specialty - remains a bright spot. "The perishable commodities, foodstuffs, and refrigerated commodities will continue to move," says Tuthill. "The lines are making it a priority to protect the refrigerated trades, both from a service standpoint and from an equipment availability standpoint, and we haven't heard of any slowdown in reefer movement."

Two leading class societies are helping the passenger vessel sector restore operations by rolling out class certification for infection prevention measures. Class has played a key role in certifying safety since the Age of Sail, and many class societies have diversified into certification for shoreside sectors as well - like healthcare and hospitality. Both DNV GL and Bureau Veritas have public health-related experience from their work for clients on shore, and both are rolling out shipboard infection-prevention certifications that unify...

Ten weeks after the USS Theodore Roosevelt arrived in Guam during what would become the U.S. Navy’s worst outbreak of COVID-19, the carrier has returned to active duty.   According to the U.S. Navy, the carrier departed Naval Base Guam and entered the Philippine Sea manned and ready to continue her scheduled deployment to the U.S. 7th Fleet area of operations.  “Returning to our mission in the Indo-Pacific after completing carrier qualifications is a significant milestone in Theodore Roosevelt’s conditions-based...

Fire, Explosion Aboard Car Carrier at Port of Jacksonville

[Breaking] About 120 firefighters are working to bring a blaze under control aboard the car carrier Hoegh Xiamen at the port of Jacksonville, Florida.  In a social media update at 1915 hours, the Jacksonville Fire and Rescue Department said that "there has been an explosion on the ship... firefighters are hurt." The department said that it was classifying the incident as a mass casualty incident level one (MCI Level One).  The fire broke out on the vehicle's seventh deck at about...

As part of the ongoing effort to complete the repatriation of crew members to their homes around the world, cruise ships have been arriving in unusual ports of call. South Africa is one of the areas that is playing host to a range of ships, many of which are new to the area. Unlike many ports around the world, South Africa has been permitting technical calls for the cruise ships. This was recently expanded to also permit South African nationals working...