DSME and DNV Partner to Develop and Promote Wind Rotor

South Korea’s Daewoo Shipbuilding & Marine Engineering is accelerating efforts to introduce its version of a rotor sail for application on large commercial ships. The shipyard which has been conducting research into rotor design and received an initial design approval in March 2021 looks to advance the technology as part of its efforts to produce eco-friendly ships.

DSME has signed a new agreement with classification society DNV to jointly develop wind-assisted propulsion systems. This will include rotor sails as well as other energy-saving devices. They will also cooperate in promoting future-related businesses.

The shipyard reported last year that it was conducting research into the application of rotor sails. DSME said that as part of the process it analyzed the application of this system demonstrating that it will result in fuel savings of more than 5 percent based on the Energy Efficiency Index (EEDI), which the International Maritime Organization (IMO) uses as an energy saving evaluation measure.

A prototype of a full-scale version of the DSME Rotor Sail is currently being assembled at the company’s shipyard. They expected it will be completed next month and then will be used to perform various tests on the technology. By the end of 2026, DSME also plans to build a Rotor Sail Demonstration Center at the Geoje Okpo National Industrial Complex. 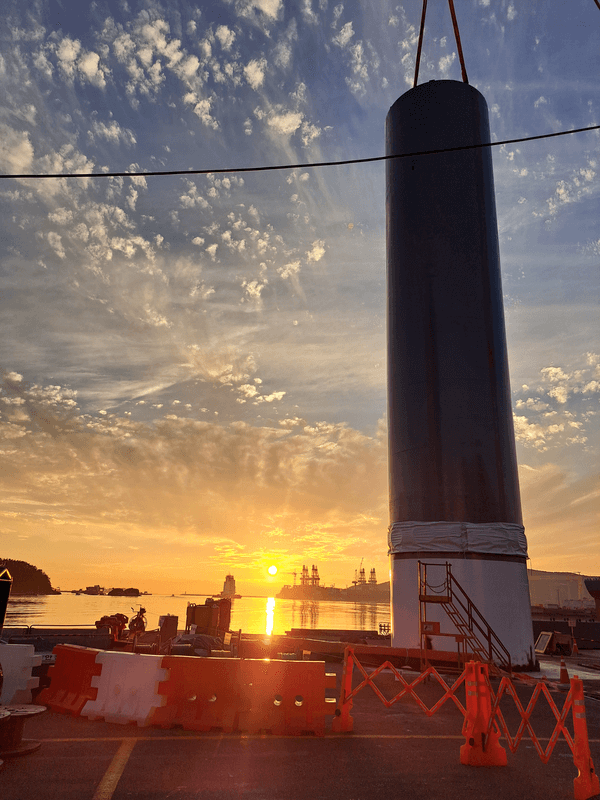 Working with DMV, the new cooperation with a focus on achieving DNV’s Type Approval Design Certificate and technical support for DSME’s future rotor sail system. They also plan to conduct a joint study of a Wind Assisted Propulsion System on deep-sea vessels such as an LNG carrier and VLCC. They will also conduct joint research for other energy-saving devices.

DSME in its efforts to develop a commercial application for rotor sails will be completing with Hyundai Heavy Industries which last month also previewed its design for a rotor sail. Called the Hi-Rotor, HHI highlighted that it was independently developed and said they had been able to achieve further improvements to the technology. Hyundai said that its design “improves the stability of the drive system compared to the belt method of existing commercial products by applying the reduction gear method to the driving part connecting the electric motor and the rotor.”

Hyundai reported that it had also obtained an Approval in Principle from the Korean Register of Shipping for its rotor design. They plan to start demonstrations on land in the second half of this year, and to actively seek product orders based on the KR design approval.