A drone attack on two of Saudi Aramco’s oil facilities in Saudi Arabia on Saturday has threatened global oil supplies.

Saudi Aramco emergency crews contained fires at its plants in Abqaiq and Khurais as a result of the terrorist attacks which have resulted in production suspension of 5.7 million barrels of crude oil per day.

After visiting the incident locations, Amin H. Nasser, Saudi Aramco President & CEO, said: “We are gratified that there were no injuries. I would like to thank all teams that responded timely to the incidents and brought the situation under control. Work is underway to restore production.”

Reuters reports a senior U.S. official indicating that the attacks came from the direction of Iran, although a Yemeni Houthi group has claimed responsibility. Iran has rejected the accusation, and said it is ready for war.

The U.S. Department of Energy (DOE) has released a statement saying: “The Secretary has been briefed on today’s drone attack in Saudi Arabia and stands ready to deploy resources from the Strategic Petroleum Oil Reserves (SPRO) if necessary to offset any disruptions to oil markets as a result of this act of aggression. The Secretary has also directed DOE leadership to work with the International Energy Agency on potential available options for collective global action if needed.” The SPRO holds 630 million barrels operated and maintained by DOE for exactly this purpose. 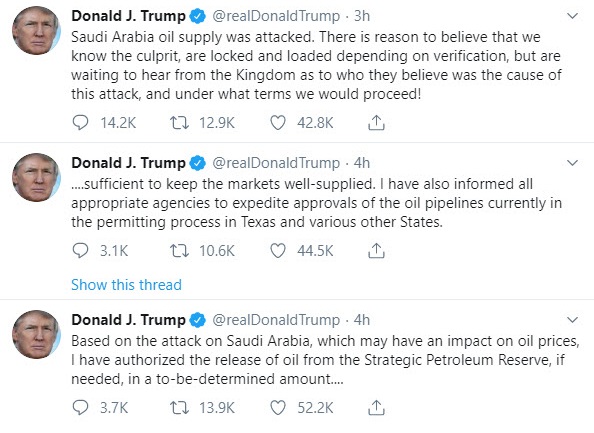 Commenting on the attacks, Per Magnus Nysveen, head of analysis at Rystad Energy, said: “The air attack by Iranian backed militia on vital oil processing terminals in the heart of Saud Arabia’s oil region has turned the market on its head over the weekend. From a situation of unprecedented global oversupply risks, the market will have to replace five million daily barrels of oil production by pulling from existing stocks until the oil facilities are brought back to safe operations.

“This could take a longer time than the authorities initially are claiming. Despite lower exports this year, Saudi Arabia has also depleted its crude oil stocks to the lowest levels in 10 years, so the country alone does not have the same robustness to Middle East interruptions as it used to have. Also, the U.S. cannot quickly replace this volume, as it takes time to relocate oil tankers, and U.S. still has limited export capacity by Very Large Crude Carriers (VLCC).”

Bjørnar Tonhaugen, head of oil market analysis at Rystad Energy, commented: “This will trigger a significant pull-down of crude oil stocks held by Saudi Aramco, stocks that serve as a crucial security buffer in case of a blockade by Iran in the Strait of Hormuz. The immediate impact on crude prices could be around $10 per barrel and we expect the impact could be around five dollars for weeks, as the situation in the Middle East just got more fragile.”