The disabled MSC containership MSC Rachele that suffered an engine room explosion and fire yesterday in the Mediterranean has been successfully towed to the port of Fos-sur-Mer, in southern France. French authorities said that the ship arrived under tow around 4:30 a.m. local time and was docked at the port by late morning on June 22.

The regional SAR operation center (Cross Med) in Toulon, France organized the rescue operation placing an assessment team aboard the ship to determine the situation and its status. They reported the fire was extinguished but the vessel was dead in the water after an explosion in the engine’s gearbox disabled propulsion. The team confirmed that it was safe to tow the vessel and MSC hired commercial tugs from the port of Marseille to rescue the ship. Weather conditions also remained favorable in the area during the rescue and subsequent tow.

While awaiting the arrival of the towing resources, French authorities reported that their chartered support and assistance vessel BSAA Pionnier remained in the vicinity of the MSC Rachele to provide assistance in the case of a further emergency. The towing started on June 21 around 8 p.m. With the situation stabilized and under control, the BSAA Pionnier was released around 10 p.m. 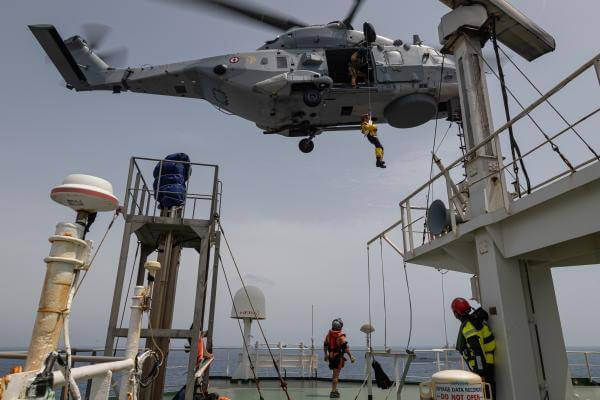 MSC released a brief statement confirming the incident in the engine room of the containership and that its priority was for the safety of the crew. “MSC is very thankful to the French Navy for their prompt assistance. Three seafarers were injured in the incident and have been evacuated by helicopters for medical care.”

The explosion and fire in the engine room were reported to Cross Med yesterday morning. A French amphibious carrier Tonnerre was operating in the area at the time of the accident. The Navy supplied helicopters and medical teams to assist with the evacuation and transfer of the injured crew to a military hospital in Toulon. Two of the injured crewmembers were reported to be in critical conditions after having suffered burns.

MSC reports that it is monitoring the situation and that the condition of the containership is currently being assessed.

“Our preliminary reports indicate that there has been no damage to the containers onboard. We have informed affected customers with cargo onboard about the vessel incident and will keep them updated about the future movements of the vessel and its cargo.”