The Diamond Princess has departed Japan more than three months after the cruise ship arrived at the Port of Yokohama during what became a highly publicized early outbreak of COVID-19.

After arriving in Japan on February 4, the cruise ship had been ordered into quarantine by local authorities. Before the ordeal was over, more than 700 passengers and crew had tested positive and more than a dozen died from the coronavirus

International governments, including the United States, ultimately arranged to repatriate their citizens from the Diamond Princess. A subsequent analysis criticized the quarantine process blaming it for spreading the virus among the passengers and crew and worsening the outcome.

This outbreak followed by a subsequent outbreak aboard Princess Cruises’ Grand Princess as that cruise ship neared California lead to Princess Cruises and later the entire cruise industry suspending operations in mid-March.

According to a statement from Princess Cruises, the Diamond Princess departed from the Mitsubishi Heavy Industries Yokohama Dockyard and Machinery Works sailing to Port Dickson, Malaysia. Currently, the ship is sailing towards Malaysia at a reported speed of approximately 13 knots.

It is unclear how long the Diamond Princess will remain at Port Dickson. In its statement, the cruise line referenced efforts to “finalize crew repatriation” but according to local authorities, they have only authorized a technical refueling and provision call with no crew being permitted ashore. Princess Cruises has canceled all its cruises worldwide through the summer of 2020 while the cruises sailing from Japan scheduled for the Diamond Princess have been canceled through October 1, 2020.

The Diamond Princess underwent an extensive sanitation project at the shipyard as well as a scheduled refurbishment and planned technical projects. Working under the supervision of the Japanese Ministry of Health, Labor and Welfare (MHLW), which instituted the quarantine of the ship, US-based BELFOR Holdings disinfected all public and crew access areas, staterooms, crew cabins, dining, and entertainment areas.

The process entailed the removal of all linens, bedding, and other material and then the team disinfected all areas in which guests and crew interacted aboard the vessel. This included all high touch surfaces, including corridors, handrails, and door handles. Disinfection and cleaning also included carpet and hard-surface flooring as well as the entire heating, ventilating, air conditioning (HVAC) systems throughout the ship. After the process was completed, about 200 staff replenished mattresses, linens, bedding, and room ornaments aboard the ship. 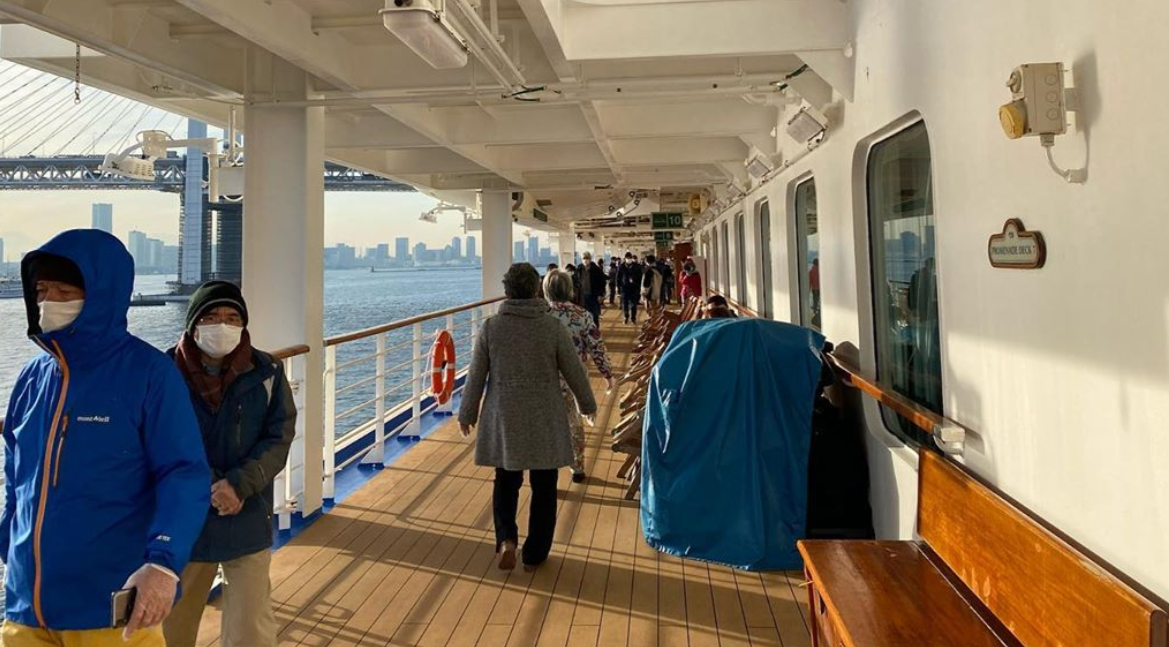 Passengers aboard the Diamond Princess during the quarantine ordeal (file photo)