Eco Marine Power (EMP) is a Japan-based technology company focusing on the development of renewable energy solutions for commercial ships. The company is developing integrated solar and wind power systems in cooperation with Japanese marine manufacturers and other partners. Recently, EMP signed a memorandum of cooperation with shipowners for a prototype installation of the integrated solar and wind systems on a ship.

Greg Atkinson, Chief Technology Officer for Eco Marine Power, explains that he began studying in 2010 how renewable energy technologies might be used on ships as a way of reducing fossil fuel use and noxious gas emissions. Initially, the focus was on the use of sails as a form of supplementary propulsion and solar power as a source of supplementary power, but with a background in electronic systems, he also started to explore overall systems and what other technologies could be included to enhance the operations and sustainability of a vessel.

EMP’s research began seeking to develop an integrated wind and solar power solution working with a Japanese company that develops automation systems for ships. Through its work with its research partners, EMP has developed several innovative renewable energy systems and devices for ships, including Aquarius Marine Solar Power, Aquarius Marine Renewable Energy (MRE), the Aquarius Management & Automation System (MAS), and the EnergySail. Patents have been granted covering Aquarius MRE and EnergySail and this year EMP applied for another patent related to a new and innovative type of sail-like device.

EMP’s research has also explored how various energy-saving devices and measures could be integrated to improve the energy efficiency of ships. This includes the Aquarius Eco Ship project, a green shipping concept design and study focused on optimizing the design of ocean-going ships such as bulk carriers, tankers, RoRo vessels, and cruise ships, to harness the power of the wind and sun. They are also working on incorporating other emission reduction and energy efficient technologies and future propulsion systems, including hydrogen fuel cells.

“Our plan is to begin the installation of the subsystems associated with Aquarius MRE later this year or early next year. Recently, EMP signed a memorandum of cooperation with a major shipowner regarding this project,” says Atkinson. “This will involve the installation of a complete Aquarius MRE System on the ship in stages and the evaluation of each subsystem in cooperation with the shipowner, before moving onto the next stage.” 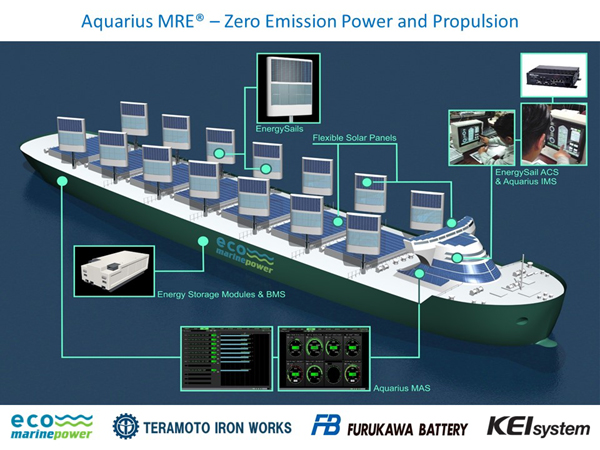 The Aquarius MRE System incorporates a range of technologies seeking to harness both wind and solar power with automation tools to increase the sustainability and efficiency of the ship’s operations. In May 2021, ClassNK issued an AiP approval for the system that integrates rigid sails, marine-grade solar panels, energy storage modules, a charging system, and computers. According to Atkinson, one of the strengths of the system is that it has been engineered to be relatively easy to install. The solar power system, for example, was installed on a ship entirely by the crew with remote support provided by the ship manager and EMP. “We intend to follow the same approach for the Aquarius MRE project although, for some equipment, additional technical and design staff will be needed, especially when the EnergySail’s are fitted,” says Atkinson.

EMP is also expanding its research and planning additional elements to further enhance sustainable operations for commercial shipping. “We plan to introduce new photovoltaic (PV) technologies and installation methods, plus we are studying how other renewable energy devices, including wind turbines, could be incorporated into the overall system architecture,” says Atkinson.

Other R&D efforts underway at EMP include design variations of the EnergySail, including options allowing them to be used on cruise ships. Later this year, EMP plans to expand upon the Aquarius Eco Ship research and design work, including adding further energy-saving devices including air lubrication systems and additional renewable energy-related technologies. They are also exploring how artificial intelligence (AI) can be incorporated with their current automation systems and control algorithms.

In addition to the applications for the maritime industry, EMP also sees applications for its solutions in areas such as offshore power and land-based renewable energy projects. They plan to expand their exploration of those applications as well as seeking other strategic partners.

EMP’s focus is on R&D and working with strategic partners to provide the hardware, software, and services for the solutions. Its goal is to develop the intellectual property, including product designs, and then it expects these solutions will be licensed to other companies, to make them available to shipyards and shipowners.