Designers are proceeding with their efforts to develop what could become Europe’s first sea-going ferry powered by hydrogen fuel cells. Renderings were released for the Scottish-led HYSEAS III project as testing is proceeding on key elements for the ship. The goal is to complete the design by March 2022, and in the next stage of the project, the consortium backing the effort will seek feasibility approval in principle of the designs from the DNV.

The HySeas project started in 2013 looking into the theory of hydrogen-powered vessels, followed by a detailed technical and commercial study to design a hydrogen fuel cell-powered vessel. The third and final part of the project, HySeas III, seeks to build on the first two parts by demonstrating that fuel cells may be successfully integrated with a proven marine hybrid electric drive system, which includes electric propulsion, control gear, batteries, and the required systems for propulsion.

The drawings show what the vessel, which will store energy from renewable sources, is likely to look like.  As a double-ended sea-going passenger and car ferry, it will have the capacity for 120 passengers and 16 cars or two trucks. It has been designed to operate on the route between Kirkwall and Shapinsay in Orkney, where hydrogen fuel is generated through wind power, although it will be capable of operating at other ports where hydrogen could become available in the future. 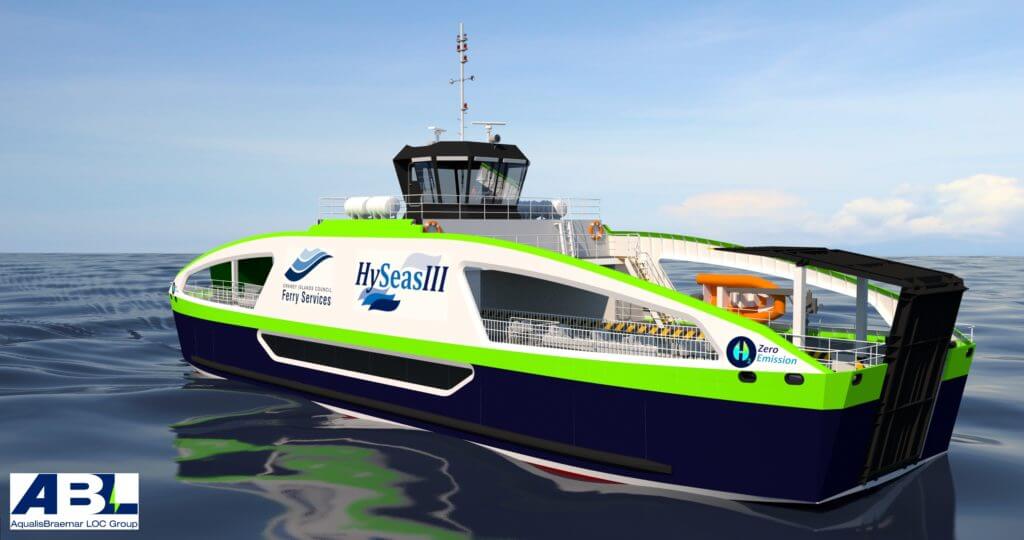 “Seeing the concept designs brings the project to life,” said John Salton, Fleet Manager and Projects Director at Caledonian Maritime Assets. “The vessel design is broadly based on our larger loch class vessels, which are double-ended. Once the designs are approved, we will move to the next stage of the project, which will see the build of the engine to be used in feasibility studies.

Testing is also underway in Bergen, Norway to demonstrate the complete fuel cell/battery/multidrive/propulsion. The full-size test mirrors the load requirements of the new ferry on the Shapinsay to Kirkwall route and will confirm power and fuel capacity requirements. The results will be used to inform the final design of the ferry.

In June 2021, the group announced the awarding of a contract to develop an integrated drive train suitable for a full-scale vessel.