Going against the current trends towards family and multi-generational cruising, a number of shipping lines are designating ships as adults-only. Once limited primarily to the traditional and high-end luxury ships, the increasing consumer interest in kids-free cruising is prompting the worldwide cruise industry to rethink its approach to adults-only cruising.

“The cruise industry is going after travelers who traditionally were interested in land-based trips no matter what their life situation,” says Chris Gray Faust, the managing editor of the consumer website Cruise Critic. “So there’s a huge market for families who want to hit the seas, but there’s also an interest from those who would rather travel away from the kids.” Demonstrating this growing interest, in a recent poll on the Cruise Critic’s U.S. webpage, half of the respondents indicated that they “rather not cruise with kids.”

The cruise lines are addressing the growing appeal of kids-free cruising, in different ways. “Historically, adults-only has been found in the form of luxury cruises with no official ban on children,” says travel agent Stephanie Goldberg Glazer. “The price tag and lack of facilities have deterred people from bringing children on those types of cruises.” Most of the luxury cruise lines, however, do accept children on their ships, the exceptions being firms such as Viking Ocean Cruises, which has an age 18 minimum.

“Many millennial parents want a break from their kids, and there is also a more diverse mix of solo travelers and couples who are looking for a quieter experience,” notes Faust. Responding to this trend, many of the larger ships have introduced adult-only pools and entertainment areas as well as for an extra fee entry into secluded relaxation or serenity zones free from the children, loud music, crowds, and the noisy pool games found in the lido areas.

Yet this does not completely satisfy the concerns of some passengers, such as Mike Scanlin, a financial software entrepreneur who enjoys cruise travel with his wife, but notes, “Our number one complaint about the experience is other people’s ill-behaved children. We would pay a premium for no one under 18 cruises.”

This is a sentiment that seems to be especially strong in the British market, where for example the venerated P&O Cruises recently announced that “following extensive research and guest feedback” it will convert its 1,874-passenger, 76,152 gross ton Aurora to adults-only in 2019. She will be joining the 1,880-passenger Oriana and 2,094-passenger Arcadia in restricting passengers to ages 18 years and over. Marella Cruises, also serving the U.K. market, responded in recent weeks by announcing that its new ship, the 1,814-passenger, 77,000-ton Marella Explorer 2 would join its fleet in 2019 also operating as adults-only in addition to frequent adults-only cruises on its other ships. Further, U.K.-based Cruise & Maritime Voyages operates some of its ships “child free” with an age 16 minimum, and while it does operate some multi-generational cruises it highlights that there are no specific children’s facilities on board.

“Adult-only sailings are quite popular with British travelers,” says Adam Coulter, U.K. Managing Editor, Cruise Critic. “I believe that Brits might have a penchant for traditional, more formal cruising, which naturally skews to an adults-only audience. These sailings are one way of encouraging travelers weary of throngs of kids to give cruising a go – and being on lines that aren’t part of the luxury market means that they’re able to do so without shelling out an arm and a leg.”

Coulter points to some of the other advantages that adults-only cruising can offer including the opportunity to “dress up for dinner, enjoy the night dancing or taking in some great West-End style entertainment,” nothing on these trips that the entertainment can be “slightly more adult-themed on a 24-hour basis.”

This is a sentiment that seems to be growing in recognition. Tanner Callais, who operates the cruising website Cruzely.com says, “The appeal of an adults-only cruise is much more than just not having kids running around the ship. There is a luxury appeal that comes with an adults-only cruise.”

The ships that are dedicated to adults do not need to reserve space for children’s amenities nor need to ensure broad age appeal in their programming. They can get more adventuresome in their culinary offering and entertainment and place a great emphasis on the destination. Shylar Bredewold, who operates the online travel agency Odyssean Travel says of the adult-only cruises “ship travel can better showcase excursions and cultural exchanges that children or families otherwise find unappealing.”

Picking up on the concept of offering an “adults experience,” Virgin Voyages has announced that one of the cornerstones of its brand will be “Adult By Design.” Scheduled to launch in 2020 sailing from Miami to the Caribbean, President and CEO Tom McAlpin says that Virgin Voyages wants to offer a “transformative experience.” During their focus group research, McAlpin says, “people winced at kids in the adult experience.” Hence, they established an age 18 minimum aboard their first as yet unnamed 110,000 gross ton ship, able to accommodate 2,800 passengers, which would make Virgin the first large, North American ships to be in the adults only market.

Only time will tell if this is a trend that will spread across the industry or remain a niche market for a segment of travelers seeking to relax without children. 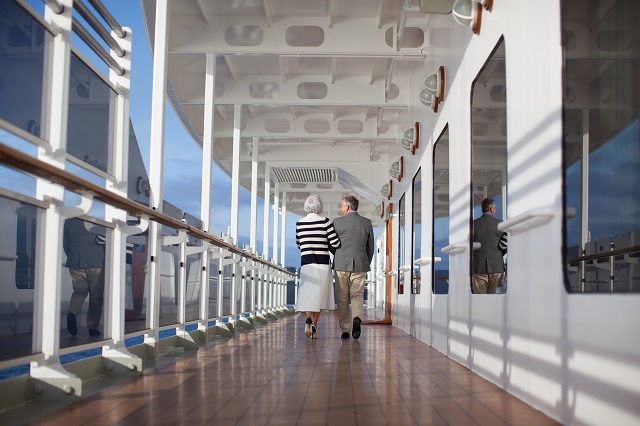