With the arrival of the cranes at North Charleston’s Leatherman Terminal, South Carolina Ports is entering the final steps in the construction of its $1 billion construction project. With the opening of the new terminal scheduled for March 2021, SC Ports will be dramatically expanding its capabilities with capacity to handle four 14,000-TEU vessels simultaneously.

Recently, the cranes for the new terminal have begun to arrive. Last week, the port received a record-setting shipping with the greatest number of rubber-tired gantry cranes loaded by Shanghai-based manufacturer ZPMC onto one vessel bound for the United States. The 15 hybrid rubber-tired gantry cranes, which will be used to move and stack containers within the 47-acre container yard, will use battery-hybrid technology operating on battery power and fitted with a smaller diesel generator that only runs to charge the batteries. The batteries are expected to reduce fuel consumption by around 70 percent when compared to conventional diesel port cranes.

The 15 cranes will join four others that arrived last month, and an additional six will arrive early next year. In addition to the 25 gantry cranes, SC Ports will also receive eight empty container handlers this month for use in the Leatherman Terminal container yard. Five ship-to-shore cranes, also from ZPMC, have already arrived at the terminal. The new ship-to-shore cranes have 169 feet of lift height above the wharf deck and an outreach of 228 feet, enabling them to work the biggest container ships calling the East Coast.

“With each equipment arrival, we take a step closer to realizing the Leatherman Terminal,” SC Ports COO Barbara Melvin said. “Our SC Ports Engineering Department and numerous project partners perform an unbelievable amount of work and coordination on the site every day to make our March opening possible.” 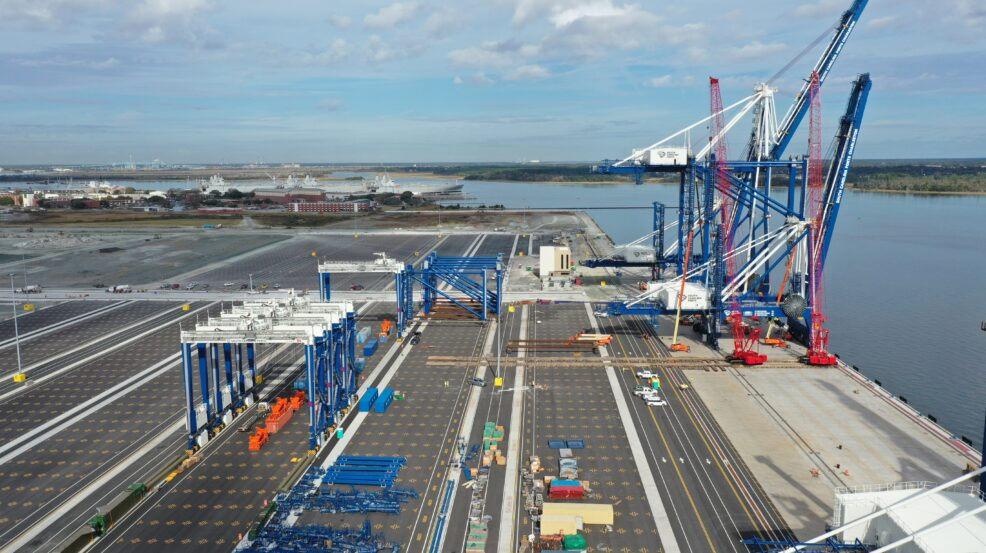 The Leatherman Terminal’s Phase One will add 700,000 TEUs of annual throughput capacity to the Port of Charleston. The terminal was designed with the ability to handle a 19,000-TEU vessel. At full build-out, the three-berth terminal will double SC Ports’ current capacity by adding 2.4 million TEUs of throughput capacity.

“The Leatherman Terminal’s 1,400-foot berth, five ship-to-shore cranes, and 25 hybrid rubber-tired gantry cranes will provide efficient, reliable service to our customers,” said SC Ports CEO Jim Newsome. “The Leatherman Terminal will have ample capacity enabling more cargo to flow in and out of the Southeast.”

To prepare for the opening of the new terminal, SC Ports also undertook efforts to modernize the current Wando Welch Terminal and deepen Charleston Harbor to 52 feet.