Nine and a half months after arriving in Genoa, Italy, the Costa Concordia has been stripped of enough material to enable it to pass over the breakwater of the Prà Voltri Port to reach the Superbacino area for dismantling. There it will go to drydock for final decommissioning. 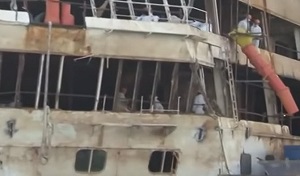 The journey is planned for Sunday May 10, but a final decision will be made after a safety meeting with local authorities and will depend on weather conditions. The 10 mile journey will take about 20 hours (24 including mooring).

The ship’s draft was reduced by the removal of over 5,700 tons of furniture and interior equipment.

Crowley Maritime subsidiary TITAN Salvage and Italian engineering partner Micoperi were recently honored with the International Salvage Union (ISU) Meritorious Service Award for their role in the successful execution the salvage of the Costa Concordia, the largest single 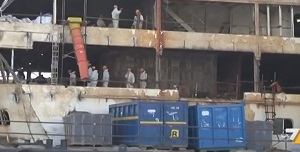 maritime wreck removal project ever to be undertaken.

The Costa Concordia ran aground in the waters surrounding Giglio Island, Italy, in January 2012, and was parbuckled (rotated upright), refloated and towed away by the TITAN/Micoperi team in September 2014. The ship salvage was the largest, most technically demanding project of its kind in history and was carried out in full public view from the island.