A keel laying ceremony marked the beginning of assembly of the first new U.S.-flagged Great Lakes bulk carrier to be built in more than 35 years. The vessel will be named the Mark W. Baker, in honor of the son of the chairman of The Interlake Steamship Company and the second generation management of the family-owned company.

“This ship is more than the steel assembled here by Fincantieri Bay Shipbuilding,” said James R. Barker, Interlake’s Chairman. “This ship represents Interlake’s determination to be an active and responsible participant in all aspects of Great Lakes trade.”

Being built at Fincantieri Bay Shipbuilding in Sturgeon Bay, Wisconsin, the new River-Class, self-unloading bulk carrier is believed to be the first ship built on the Great Lakes for U.S. Great Lakes service since 1983. Measuring 639 feet in length and 28,000 DWT, the ship will transport raw materials such as salt, iron ore, and stone to support manufacturing throughout the Great Lakes region. Jointed designed by Fincantieri and Interlake, the bulk carrier, complete with advanced vessel and unloading systems automation.

Ordered in April 2019, and due to enter service in mid-2022, this will also be the company’s first new ship since 1981. The Canadians in recent years have built several new vessels as a fleet renewal effort for their lake service, but unlike the U.S. they did not have cabotage laws so those vessels were built overseas, mostly in China due to the lower costs.

The engineering and pre-fabrication work of its modular sections had been underway for nine months prior to the first block being lowered into Fincantieri Bay Shipbuilding’s graving dock. More than a dozen team members from Interlake, along with the shipbuilders of FBS, stood in a socially-distanced manner to watch the block being lowered into place.

“Our workforce is very proud to construct what will become a “homeport ship,” says Fincantieri Bay Shipbuilding’s Vice President and General Manager Todd Thayse. “This large-scale bulk carrier is being built on the Great Lakes and will operate right here on the Great Lakes, which creates a sense of local and regional pride. Today’s ceremony with Interlake and the naming of the vessel really brings this ship to life. We are excited and appreciative for Interlake’s continued confidence in the quality of our work.”

During the keel laying ceremony, there is a coin-setting tradition of having the youngest apprentice place newly-minted silver and gold coins under the keel upon which the ship will be constructed. Luke and Eli Barker, sons of Mark W. Barker and third-generation members of the family company, were chosen as the symbolic “young apprentices.” The brothers collected coins from various Interlake officials and tucked them in a bag, which they nailed into an oak block upon which the keel was set. When the ship is finished, the owners and others are presented with the block and coins, with both pieces becoming a part of the ships’ artifacts. 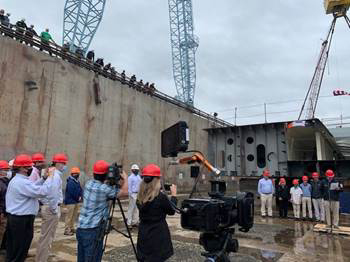 “It is truly amazing to have a ship that is built here in Wisconsin and made from steel from Indiana that came from iron ore mined in Minnesota with U.S. crews, U.S. workers, and U.S. miners all doing this for our great Country,” said Mark W. Barker, President of Interlake. “This is just an amazing story that I am absolutely privileged and so proud to be a part of as we continue the long tradition in this Country of building, running and operating the U.S. fleet.”

Ideol, a floating offshore wind startup based in France, has reached an agreement with Swedish manufacturer Bygging Uddeman (BYUM) for the serial production of floating concrete base structures for wind towers.  BYUM is known for its moving gantry slipforming technology, which it invented in 1944. By removing the need for building up and removing forms, it lowers the cost of casting large vertical concrete structures - particularly caissons. It has been deployed for hundreds of major infrastructure projects around the...

On Thursday, the U.S. Department of Justice announced that it has sold four cargoes of Iranian gasoline that were seized from commercial tankers on the high seas. The sale totaled about 1.1 million barrels and netted about $40 million in proceeds. The buyers were not disclosed.  According to the Justice Department's complaint, the shipments were intended for delivery to Venezuela and were set up by Iranian national Mahmoud Madanipour, who allegedly has ties to the Islamic Revolutionary Guard Corps (IRGC)....

A team of UK maritime researchers have set out their vision for a fleet of zero carbon coastal ships to transport goods around the UK via its ports by 2030. The Zero-carbon Coastal Highway concept was developed by a core team of the Maritime Research and Innovation UK (MarRI-UK) including experts from the University of Southampton, Shell Shipping & Maritime and the BMT Group. In detailing their concept, the organizations noted that moving goods by water is well established as...

US Government officers recently seized more than 31,000 counterfeit products arriving in a containerized cargo shipment from China into the Los Angeles-Long Beach seaport area. Containing everything from counterfeit pharmaceuticals to consumer goods, US Customs and Border Protection (CBP) estimated that the goods had a retail value of over $3.5 million. The operation to intercept the counterfeit merchandise was a multi-agency effort encompassing officers from CBP assigned to the Los Angeles/Long Beach seaport in coordination with import specialists from the Consumer Products and...