Coal Carrier Equipped with Sail to Enter Service in 2022

Japan’s Mitsui O.S.K. Lines is proceeding with plans for the world’s first modern-day coal carrier equipped with a hard sail. The shipping line announced that it has reached a coal transport deal with Tohoku Electric Power Co., that will employ the vessel outfitted with the “Wind Challenger,” a telescoping hard sail power propulsion system.

The 99,000 DWT vessel will be built by Oshima Shipbuilding Co. and will have a length of approximately 770 feet. They anticipate it will enter service in 2022. 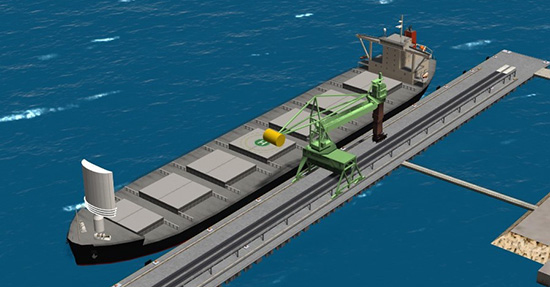 At the dock the sail is lowered - MOL photo

MOL and Tohoku Electric Power plan to conduct more verification tests on the system’s GHG reduction effects closer to the 2022 target date for the new carrier to begin operation. Current estimates are that the Wind Challenger will contribute to approximately a five percent reduction of greenhouse gas emissions on the Japan-Australia route or approximately eight percent on the Japan-North America West Coast route, in comparison with a conventional vessel of the same class.

Efforts that contributed to the development of the Wind Challenger began in 2009 with an industry-academia joint research project led by The University of Tokyo. In January 2018, MOL and Oshima Shipbuilding took charge of the design and in October 2019, received an Approval in Principle (AIP) for the hard sail system. Over the past year, the companies have been developing a detailed design and implementation plan for the sail system.