Ukraine is working to revive long-idled inland ports along the northern edge of the Danube River Delta, and with the removal of Russian forces from Snake Island, it may be able to increase their potential.

The northernmost branch of the Danube delta follows Ukraine's southern border, and it is lined with a series of small riverine ports. These might not have merited global attention in years past, but with Russia blockading all of Ukraine's coastline, they have taken on a new importance.

Odesa and Mykolaiv have historically handled a massive share of the nation's grain exports, but these seaports and terminals are cut off from global commerce by the Russian Navy. This leaves Ukraine with very few options for exporting its crops, and some 25 million tonnes of grain are currently sitting in storage. Road and rail transport are not up to the task of carrying this much grain overland into neighboring countries.

However, some of the ports on the Danube are taking up part of the load. The port at Reni, about 50 nm upriver on the northern branch of the Danube, has been underutilized but is now undergoing reactivation. Alla Stoyanova, head of the Odesa region's department of agricultural policy, told the Guardian that the Reni port complex can't replace Odesa, but it can contribute.

These shallow-draft inland ports can transship cargo by barge into Romania for onward transport, but they can realize additional potential if they are accessible from the sea. The area can be reached by two waterways: the narrow Sulina Canal through Romanian territory, which has limited capacity; and the Bystroe (also translated as Bystry, Bystre or Bystroye) Canal, near the mouth of the Danube's northern branch.

The Bystry was dredged to a depth of 4.5 meters during construction - much shallower than the Sulina Canal, but adequate for the river-sea class coasters which commonly trade in the Baltic. The shallowest depth alongside at Reni is compatible with vessels of this size.

According to Stoyanova, over 150 ships have been waiting to enter the Sulina Canal, but they can only get through it at a pace of five or six vessels a day.  Until recently, the more capacious Bystry estuary route has been closed - but that has changed with the removal of Russian forces from Snake Island.

The small rock outcropping known as Snake Island (Zmiinyi Island) sits just 25 miles from the Bystry estuary's mouth, and it had been occupied by a well-armed Russian garrison up until the end of June. A sustained barrage of Ukrainian artillery fire forced the occupying Russian troops to depart on June 30. Now that the Russian forces have been removed from the area, the Administration of Sea Ports of Ukraine believes it is safe to reopen the Bystry route to shipping.

"Given the liberation of Zmiinyi Island from Russian troops and the build-up of a large number of ships waiting to proceed through the Sulina Canal, it is possible to use the channel of the Bystry estuary of the Danube-Black Sea waterway for the entry/exit of ships transporting agricultural produce," the administration announced Saturday. 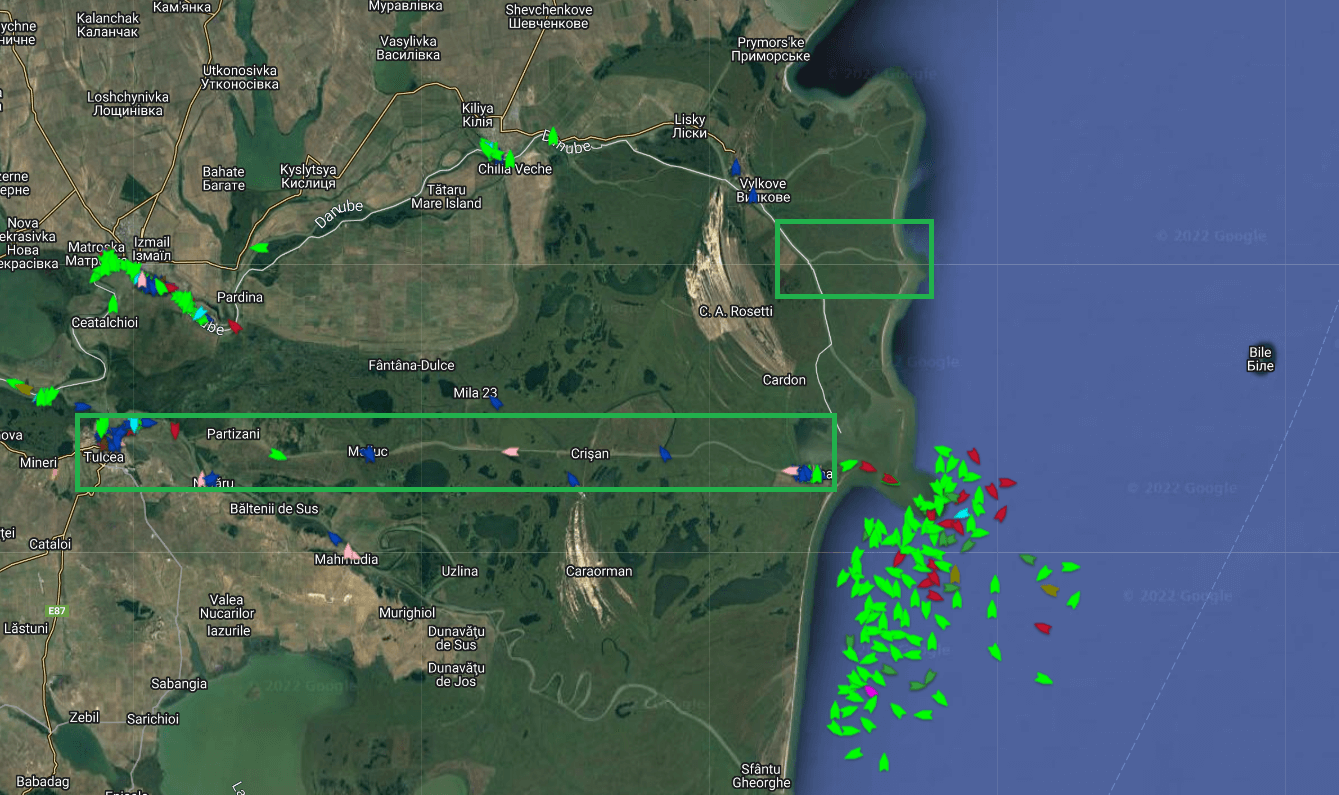 Dozens of coastal freighters wait at the entrance to the Sulina Canal, highlighted center left. The Bystry Canal entrance to the Danube is to the north near Vylkove, top center. Snake Island (Bile) sits just off the coast, center right. Illustration courtesy Pole Star.