The International Association of Antarctica Tour Operators (IAATO) has announced its tourism figures for the 2016-2017 noting that most Antarctic visitors originate from the U.S., but China has now moved up to second place ahead of Australia.

The number of visitors travelling to Antarctica with IAATO members was 44,367, an increase of 15 percent compared to the previous season. Overall, visitation levels, particularly in the cruise sector of the industry, have been increasing steadily since 2011-2012. IAATO’s estimate for next season, 2017-2018, shows continued growth in line with global trends with 46,385 visitors expected, an increase of five percent.

American visitors remained the most numerous, increasing by seven percent in 2016-2017 and accounting for 33 percent of the total number. The number of Chinese visitors increased by 25 percent compared to the previous year, moving them up to second place. Australian, German and British visitors were the next most abundant nationalities, increasing by five percent, 45 percent and 19 percent respectively.

Last year, American and Australian visitors were the most numerous, accounting for 35.5 percent and 11 percent respectively. China moved up to third place, accounting for 10.6 percent of the total, increasing by 25.7 percent since the previous season.

Most travellers depart from South America to visit the Antarctic Peninsula. The majority of these Peninsula visitors traveled the traditional route from Chile or Argentina on vessels that carry fewer than 500 passengers and offer excursions ashore. This sector grew by 20 percent compared to the previous season due to two vessels entering the market.

Of the remainder, some flew to the Peninsula where they immediately joined a vessel for onward cruising. This ‘air-cruise’ sector of tourism continued to show the most growth at 36 percent. Cruise only tourism, vessels carrying more than 500 passengers that do not make landings, declined by eight percent.

Deep field tourism, when visitors fly to Antarctica’s interior from South America or South Africa, accounts for only one percent of overall Antarctic tourism. However, this form of tourism grew by 10 percent compared to the previous season.

The vast majority of tourism voyages operate in the Antarctic Peninsula region during the five-month austral summer season (from November to March), departing from Ushuaia, Argentina.

IAATO requires its members to abide by the Antarctic Treaty System.  Therefore, tour operators refrain from making any landings in Antarctica from vessels carrying more than 500 passengers. They must also coordinate with each other so that not more than one vessel is at a landing site at any one time. 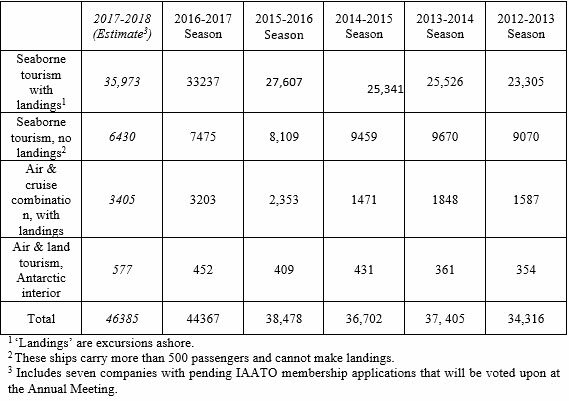