The Canadian government has introduced additional measures to protect its population of endangered North Atlantic right whales. The measures include slowing down more ships, increasing the zones in which speed restrictions will apply, increasing aerial surveillance and funding for initiatives to enhance marine mammal response.

Specifically, the additional measures include:

• Increasing surveillance conducted by both Transport Canada’s National Aerial Surveillance Program and Fisheries and Oceans Canada to triple the number of overflights. Since June 29, Transport Canada has increased flights from two a week to now up to two per day, or 14 flights per week, and Fisheries and Oceans Canada has recently increased weekly flights from five to 10. This will continue until at least July 15, and the results will be used to determine a plan for increased surveillance for the rest of the season.

• Dividing the mandatory slowdown zone into northern and southern zones so that, in the case of adverse weather conditions, the mandatory speed limit would be temporarily lifted only in the affected zone.

• Adjusting the trigger for fisheries closures so that if one or more right whale is observed anywhere in the Gulf of St Lawrence (including around Anticosti Island, the Cabot Strait, as well as the Straight of Belle-Isle) the area of the sighting will close for 15 days for non-tended fixed-gear fisheries. Major fixed-gear fisheries in the Southern Gulf of St. Lawrence were closed for the season on June 30, 2019.

• Investing $1.2 million in 2019 as part of a $4.5 million commitment over four years to further enhance the Marine Mammal Response Program, which responds to marine mammals in distress, including disentanglement of North Atlantic right whales. This funding is part of the $167.4 million Whales Initiative in Budget 2018.

• Providing new funding to further advance protection of the North Atlantic right whale. As part of the $1.3 billion Nature Legacy Initiative (Budget 2018), the Canada Nature Fund for Aquatic Species at Risk will be providing over $5 million over the next four years towards six projects.

• Funding two additional projects under the Habitat Stewardship Program to mitigate risks and support conservation in partnership with the Canadian Whale Institute. 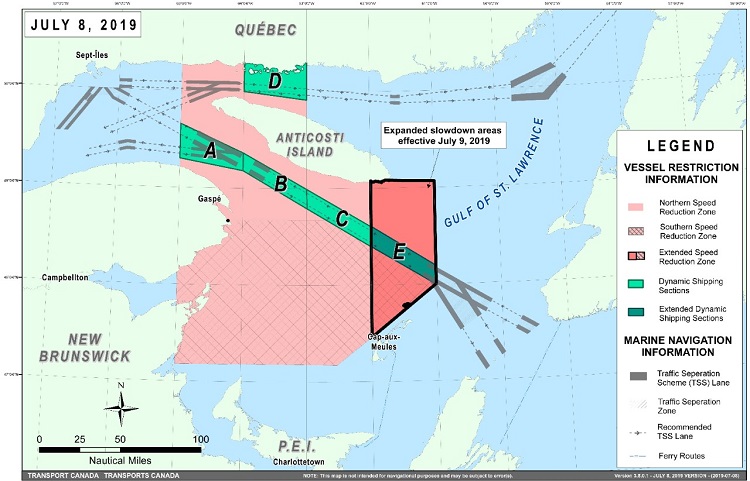 A complex mix of threats - such as vessel collisions, gear entanglements, availability of prey, increased noise levels and pollution in the water - are impacting many whale populations, notably the North Atlantic right whale, the Southern Resident killer whale, and the St. Lawrence Estuary beluga. Through the Canada Nature Fund, federal investments have been made in projects that will support the protection of North Atlantic right whale, including:

• In partnership with Merinov and other partners, a project in zones 12 and 16 of snow crab fisheries to reduce the chances of entanglement and bycatch caused by ghost gear.

• In partnership with the Canadian Wildlife Federation and other partners, a project in the Gulf of St. Lawrence, Bay of Fundy, and Scotian Shelf region to reduce mortality and serious injury to marine species-at-risk from entanglement in fishing gear.

• In partnership with the Quebec-Labrador Foundation and other partners, a project to reduce threats caused by fishing interactions in Newfoundland waters, including actions to reduce the volume of plastic debris entering the marine ecosystem.

• In partnership with JASCO Applied Science and other partners, a project to reduce ocean noise to develop tools and solutions for understanding and mitigating impacts on marine life in in the Gulf of St. Lawrence, Bay of Fundy, and Scotian Shelf.

• In partnership with LGL Limited and other partners, a project to deploy and test an infrared camera system on a seismic vessel offshore Newfoundland and Labrador to determine how effective the IR-camera system is at detecting marine mammals within and beyond the 500 m Safety Zone in environmental conditions of the North West Atlantic.

• In partnership with Homarus Inc. and other partners, a project in snow crab zone 12 aims to reduce entanglement by reducing the amount of rope in the water and detect and develop methods to retrieve ghost gear.