A new report by the International Transport Forum at the OECD concludes that Japan’s ambition to become an international bunkering hub for LNG is likely to be successful. The Port of Keihin (Yokohama, Tokyo and Kawasaki) is located at one end of the North Pacific trade route as a first port for loading and unloading and has direct services to ports in North America. Additionally, the port already has existing LNG bunkering infrastructure.

The nation is the world’s largest importer of LNG by a large margin. Alongside the fuel’s main use in electricity production, the country has developed marine bunkering facilities in anticipation of an uptake in the its use for shipping. Japan is also a major trading nation, and the volume of its maritime trade provides the basis for its LNG bunkering hub strategy. 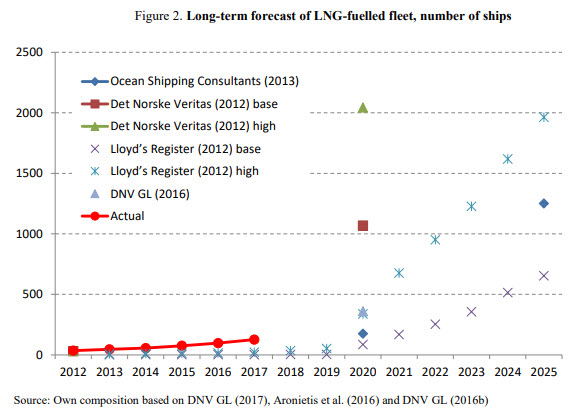 There are currently 40 LNG terminals on Japan’s coasts of which four are under construction. Japan has eight secondary LNG terminals dedicated to domestic vessels. Further advantages of the location of the port of Yokohama include the presence of nearby LNG infrastructure, such as the LNG terminals Negishi and Ogijima. Another three important LNG terminals, Higashi-Ogishima, Sodegaura and Futtsu, are located in the Tokyo bay area.

The report anticipates that Japan and Singapore could become leading Asian hubs for LNG given the expected future size of the Asian market, which is estimated to reach over one trillion cubic meters by 2035. Singapore could become a bunkering hub for Southeast Asia or Europe-bound trade, and Japan would a hub for East Asia and North America-bound trade. By engaging in strategic cooperation, the countries could streamline equipment standards, qualifications required for seafarers and safety measures to facilitate the operation of LNG-fueled ships. 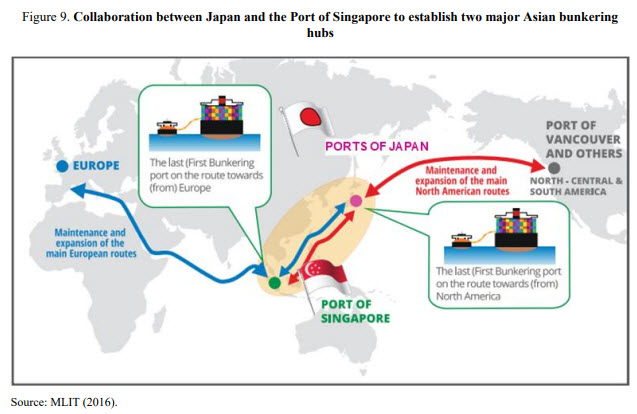 Japan's well-developed consumer and producer markets have turned it into a crucial node along East-West maritime trade lanes. This is reflected in the significant maritime flows touching Japanese ports, from ships as diverse as container carriers, tankers, car carriers and grain carriers. Japan has also
emerged as a cruise destination and seen an increasing number of calls from cruise ships. Therefore, it is well-positioned to become an international LNG bunkering hubs for these types of ships if they were to be LNG-fueled in the future.

The report concedes that some uncertainties exist: Emissions regulations will soon target maritime CO2 and no longer mostly NOx and SOx. LNG can cut CO2 by around 20 percent but is not the ideal solution to reduce greenhouse gas from ships. For instance, it releases methane from unburnt gas in engine exhaust (methane slip), and handling LNG at each stage of the supply chain leads to fugitive emissions.

The report  recommends to:

•       Involve stakeholders in the development of LNG bunkering policies including LNG importers, global and coastal shipping companies, as well as firms with a high degree of expertise in storage and handling of LNG.

•       Plan LNG infrastructure in a flexible manner that can be scaled up if and when demand grows. New storage facilities and gas infrastructure should be able to accommodate a range of gases, such as bio-methane.

•       Stimulate international cooperation in LNG bunkering services. Increasing the number of LNG-propelled vessels significantly requires a worldwide network of LNG bunkering facilities. Japan has been active in international coordination efforts, for instance via a Japan-Singapore Summit Meeting in 2016 and a Japan-Singapore Joint Study on LNG Bunkering in 2017. These efforts need to be sustained.

The work for the report was carried support by a voluntary contribution from the Government of Japan.