Britain’s largest cruise ship, P&O Cruises 185,000 gross ton Iona celebrated her coronavirus delayed maiden voyage with a spectacular fireworks display on August 9 off her namesake island in northern Scotland. In addition to being the largest passenger ship to be registered in the UK, she is also the first of two LNG-fueled cruise ships being built for P&O.

“Iona’s maiden voyage is the start of a new era in travel as Britain’s most environmentally-friendly cruise ship, the first in the country powered by liquefied natural gas,” said P&O Cruises President Paul Ludlow. “For this special maiden voyage, we wanted to bring guests to the island of Iona which has influenced many aspects of the ship.” 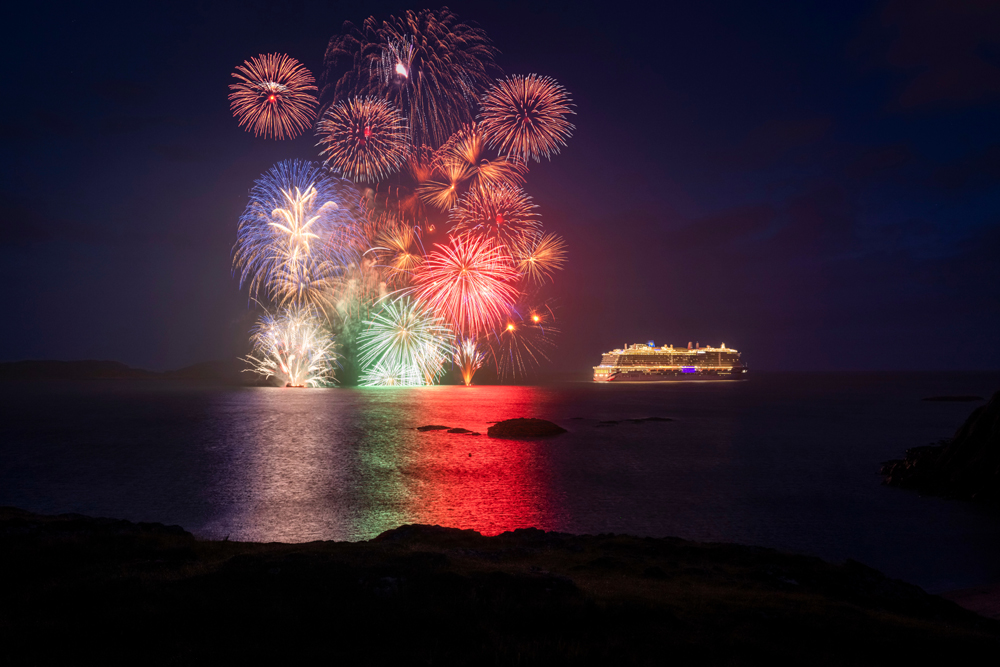 The Iona is the fourth cruise ship derived based on a Carnival Corporation design for LNG-powered cruise ships with the vessels being built by Meyer Werft in Germany and Meyer Turku in Finland. The first of the class, the AIDANova, became in 2018 the world’s first cruise ship able to operate exclusively on LNG-fuel and was followed by similar ships for Costa Cruises and Carnival Cruise Line. Additional versions of the design are being built for AIDA, Costa, Carnival Cruise Line, and P&O. Meyer in Papenburg began construction on Iona’s sister ship, the Arvia with a steel cutting in February 2021 and delivery expected in 2022.

After a delay in fitting out due to the coronavirus and Carnival Corporation deferring deliveries due to the pause in cruise operations, the Iona was officially handed over to P&O in October 2020. The cruise ship, however, waited for her maiden voyage until the UK permitted the resumption of domestic cruising.

The Iona’s first cruise is currently sailing around the UK coast, for seven nights, having departed Southampton on August 7, 2021. She anchored off the island of Iona as part of her scenic cruising in Scotland and passengers were treated to the fireworks display in celebration of the maiden voyage.

Measuring approximately 1,129 feet in length, the Iona features 17 passenger decks providing accommodations for 5,200 passengers and 1,700 crew. Among the unique design features is the SkyDome, a glass dome measuring around 10,000 square feet atop the central atrium area of the ship. The dome weighs 105 tons and consists of 340 triangular glasses. The Iona also features the first gin still on a cruise ship, distilling and bottling the spirits for sale onboard.