The protection covers an area of 2.8 million square kilometers (1.1 million square miles), roughly the size of the Mediterranean Sea. It affects Arctic seas that are at least 200 kilometres away from the shores of any coastal states.

The legally binding agreement will automatically be extended every five years, unless a country objects or a science-based fisheries management plan is put in place.

The Central Arctic Ocean has experienced increased pressure from the fishing industry, as a result of greater accessibility due to sea ice melting. 40 percent of this historically ice-covered area has experienced ice-free summers in recent years.

Greenpeace USA Oceans Campaign Director John Hocevar said: “As industrial fisheries have depleted fish populations all over the world, fleets have expanded into areas that were once only visited by polar explorers and Pacific islanders. With melting sea ice opening up new areas to fishing for the first time, this agreement to prevent fishing fleets from rushing into the Central Arctic before we have even a basic understanding of the ecosystem couldn't come at a better time.”

The Pew Charitable Trusts also praised the new agreement. Steve Ganey, who oversees Arctic marine projects for Pew, said: “With foresight and caution, these 10 governments seized a historic opportunity to put protections in place before commercial fishing starts. Covering over a million square miles, the Central Arctic Ocean is now the largest marine area to be proactively placed off limits to fishing.”

With an area of about 5.4 million square miles, the Arctic Ocean is about 1.5 times as big as the U.S. It is bordered by Greenland, Canada, Norway, Alaska and Russia. The average depth of the Arctic Ocean is 12,000 feet and it is 17,850 feet at its deepest point.

The Arctic announcement comes as protection comes into force this week in the Antarctic for a new marine sanctuary for the Ross Sea, covering 579,153 square miles. 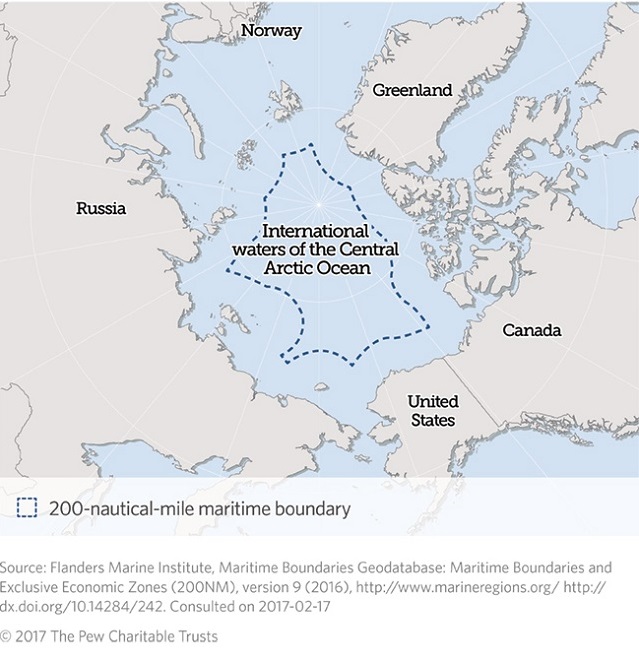