A report commissioned by the U.S. National Waterways Foundation indicates that inland river barge transportation has improved its fuel efficiency for cargo transport compared to road or rail.

The improvement for barge transport was due in part to the continual upgrading of the fleet and the high utilization rates that were achieved in the latter part of the study period. Rail and truck remained almost unchanged during the same period. 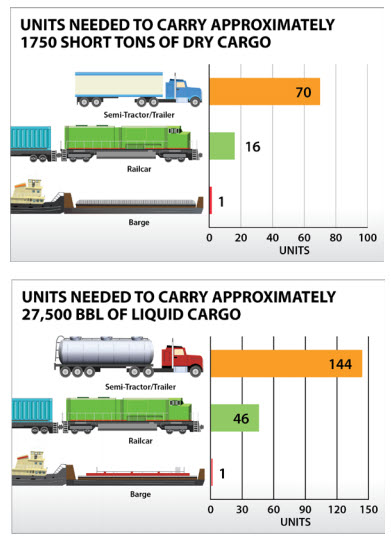 The study, A Modal Comparison of Domestic Freight Transportation Effects on the General Public: 2001–2014 (January 2017), was conducted by the Texas Transportation Institute’s Center for Port and Waterways at Texas A&M University. It is an update from an earlier study peer reviewed in 2009 which was updated in 2014 and again in 2017.

To fully appreciate the carrying capacity of a barge, the study notes that a loaded, covered hopper barge transporting wheat carries enough product to make almost 2.5 million loaves of bread, or the equivalent of one loaf of bread for almost every person in the state of Kansas.  A loaded tank barge transporting gasoline carries enough product to satisfy the current annual gasoline demand of approximately 2,500 people.

The report estimated that the amount of cargo currently transported on major rivers is equivalent to more than 49 million truck trips annually. The hypothetical diversion of current waterway freight traffic to the nation’s highways would add 1,046 combination trucks to the current 875 trucks per day, per lane on a typical rural interstate. The percentage of combination trucks in the average annual daily traffic on rural interstates would rise 14 percent, from the current 17 percent.

After adjusting for differences in cargo quantity moved by each mode, for each member of the public injured in a barge accident, 80.44 are injured in rail accidents and 824 are injured in truck accidents.  For fatalities, there are 79 trucking deaths and 21.9 rail deaths for one barge-related death.

The rate of spills of more than 1,000 gallons are very low for barges, at 2.12 gallons per-million-ton-miles, rail at 5.95 and trucks at 6.04. Additionally, inland waterways transport generates far fewer emissions of hydrocarbons, carbon monoxide and nitrous oxide than rail or truck per-million-ton-miles.  On this basis, barges emit 15.6 tons of C02, while railroads emit 21.2 tons of C02 (30 percent more than barge transportation). Trucks generate 154.2 tons or 10 times more emissions than barges per ton-mile of cargo moved.