The Ballast Water Management Convention amendments formalizing the implementation schedule for the D-2 standard entered into force on October 13.

The International Convention for the Control and Management of Ships' Ballast Water and Sediments, 2004 (the BWM Convention) entered into force in 2017. The amendments formalize an implementation schedule to ensure ships manage their ballast water to meet a specified standard (D-2 standard) aimed at ensuring that viable organisms are not released into new sea areas. They also make mandatory the Code for Approval of Ballast Water Management Systems which sets out how ballast water management systems used to achieve the D-2 standard have to be assessed and approved.

The amendments to the BWM Convention were adopted in April 2018. In essence, the schedule for implementation means that compliance with the D-2 standard set out in the Convention will be phased-in over time for individual ships, up to September 8, 2024. 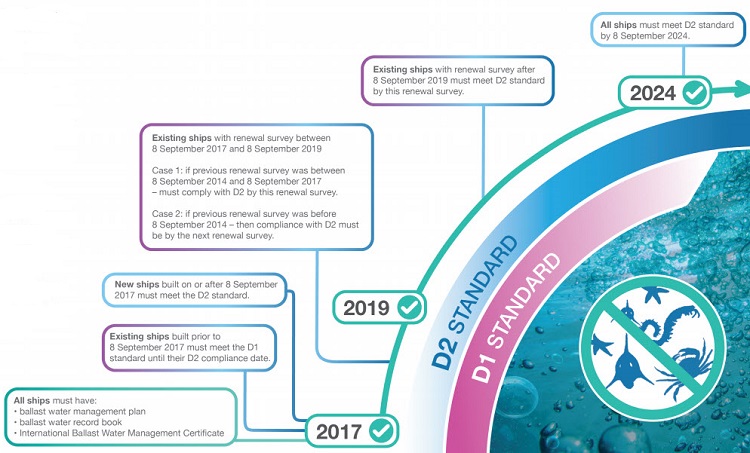 In many cases, meeting the D-2 standard will be achieved through fitting ballast water management systems. There are now many such approved systems on the market, ranging from those which use physical methods such as ultraviolet light to treat the ballast water, to those using active substances. Those that use active substances have to go through a thorough additional approval process.

The D-2 standard specifies that ships can only discharge ballast water that meets the following criteria:

Implementation of the Ballast Water Management Convention contributes to achieving a number of the United Nations Sustainable Development Goals (SDGs), in particular, SDG 14 on life below water, which calls for sustainable use of the oceans; and SDG 15, which includes targets relating to biodiversity and curtailing the spread of invasive species.

A list of approved systems can be found here.