When Graham Daws, Managing Director of Emanuel Exports, responded to whistleblower footage of dying sheep on the livestock carrier the Awassi Express, he said that the company had already reduced stocking rates in summer by up to 15 percent beyond the Australian government benchmark. Since the release of the footage, the government has decided that a 17.5 percent reduction is called for; a move that the animal welfare organization the RSPCA has said is as futile as shuffling the deckchairs on the Titanic.

The whistleblower footage shows images on board an August 2017 voyage of the Awassi Express for Emanuel Exports when 2,400 sheep died of heat stress, and it became the centerpiece of an investigative media report on the 60 Minutes program, aired on April 8. Throughout the program, whistleblower footage from five separate voyages is aired depicting thousands of sheep suffering severe heat stress; sheep caked in melted feces and urine; injured and sick animals left to die slowly; decomposed bodies left in pens with living sheep and pregnant ewes giving birth and their lambs dying.

WARNING: THIS FOOTAGE SHOWS GRAPHIC CONTENT THAT SOME VIEWERS MAY FIND DISTURBING

Anyone who has seen the footage will immediately know the new stocking density simply won’t make a difference, said RSPCA Australia Chief Science and Strategy Officer Dr. Bidda Jones. The Department of Agriculture appears to be still accepting that sheep on a three to four week journey don’t all need to lie down and don’t need easy access to food and water – which is clearly preposterous, she says.

According to the RSPCA, the image below demonstrates what a 17.5 percent reduction in the government's current stocking density requirements would look like (the black-colored sheep indicate the number of animals that would no longer be in the pen). 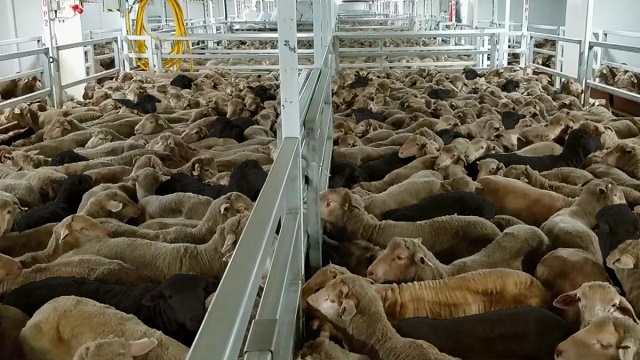 “Stocking density would need to be at least halved to make any kind of meaningful difference, that’s the fact that’s backed by science,” says Jones. “This level of bureaucratic response, given the scale and seriousness of this evidence, is woefully inadequate and, frankly, very alarming,” she says. “The RSPCA is becoming critically concerned that the regulator has not only failed farmers and the community in the past, but appears unable to perform its role correctly, even under such intense scrutiny.”

Jones is critical of the Department's dual roles in relation to the live export trade. ““Let’s be clear - the job of the regulator should not be to promote, advocate for or facilitate this industry.”

The department has issued a statement saying: “The release of live export footage this week on a series of voyages clearly demonstrates that mortality events are only one indicator of welfare outcomes on board a vessel. The department takes this information very seriously and is working to immediately ensure that the welfare of exported animals is protected to the full extent of the law.”

The Department's intentions will be showcased in it's handling of another voyage of the Awassi Express. The vessel is anticipated to depart Australia this week. The number of sheep that will be allowed to be loaded is not yet clear.

Meanwhile, another live export ship the Maysora started loading at night on Wednesday, and it’s unclear what – if any – new conditions have been applied to maintain animal welfare. Registered in the Bahamas and built almost 30 years ago, the Maysora is a slightly smaller but older ship than the Awassi Express. Like the Awassi Express, it is a converted container ship.

In 2014, RSPCA South Australia investigated the company after receiving a complaint that electric prods being used (illegally) on live camels being loaded for export, in violation of industry regulations.

In 2006, the Maysora arrived in Israel with a consignment of sheep that was rejected due to fears of a disease outbreak - 862 sheep died during the month long voyage. After offloading some sheep in Jordan, around 40,000 were then taken unexpectedly to Egypt where they were slaughtered as part of the Muslim festival of sacrifice. Around 241 cattle also died in board, while hundreds more reportedly perished in feedlots shortly after being offloaded from the ship.

In 2005, the ship was fully laden with 80,000 sheep when it was delayed at Fremantle due to engine trouble. No animal welfare authorities were allowed to monitor the condition of the animals on board.

The RSPCA has called for a live export ban. “We have to keep asking, why are we doing this? Why are we going to these extraordinary lengths to facilitate a trade that’s destroying our international reputation, causing thousands of Australian animals to suffer and die, and offers very little actual benefit to farmers?” asks Jones.

After the 60 Minutes' footage was aired, the U.K. government, although not involved in the program's coverage, announced a call for evidence for a potential ban on the live export of animals for slaughter after Brexit.