Asia is the world’s largest consumer of LNG, accounting for three-quarters of global LNG trade and one-third of total global natural gas trade. However, the region lacks a pricing benchmark that can reliably reflect supply and demand changes in Asia’s natural gas markets.

The U.S. has emerged as a major LNG supplier, so the U.S. Energy Information Administration (EIA) commissioned a study to examine the potential for an Asian hub. Currently, no location in Asia has sufficiently developed physical infrastructure or regulatory frameworks to accommodate the creation of a natural gas trading hub, but the governments of Japan, China and Singapore are each exploring the possibility. 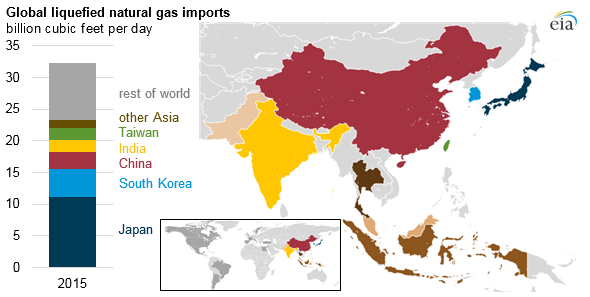 Natural gas market hubs, such as Louisiana’s Henry Hub or the U.K.’s National Balancing Point (NBP), have been a key feature of competitive gas markets in the U.S. and Europe. These hubs provide locations, either physical, in the case of Henry Hub, or virtual, in the case of NBP, for trading natural gas and ultimately for determining price. The most important hubs have publicly reported price indexes that are benchmarks for the value of natural gas in the larger regional market.

While natural gas hubs in North America and Europe are pipeline-based (for example, Henry Hub in Louisiana is close to natural gas infrastructure on the U.S. Gulf Coast), major countries in Asia rely on LNG as the primary source of natural gas.

The study found that LNG-based hubs present challenges compared to pipeline-based hubs. Pipeline hubs rely on continuous flows of natural gas, daily scheduling of receipts and deliveries, standardized natural gas specifications, uniform transportation and contracting rules and diligent regulatory oversight. In contrast, LNG shipments can be large and difficult to store, there can be significant time between contracting and delivery and cargoes can differ in LNG specifications.

In 2016, the Japanese government developed a comprehensive strategy to liberalize its domestic natural gas market and launched major initiatives to encourage private-sector participation in the development of an LNG trading hub and a pricing index. In addition, Japan, China, and Singapore have established benchmark LNG pricing indexes.

For the next few years, LNG indexes will likely remain the most reliable indicators of natural gas market value in Asia. As existing LNG price surveys continue to improve in accuracy and increase their significance as indicators of the market price for LNG and as reliable hub-based price indexes emerge, indexes will be more reliably used to not only set the pricing for sales and purchase contracts, but also to serve as the basis for greater volumes of futures and derivatives trading.

The EIA report is available here.