A report co-produced by the International Union for the Conservation of Nature (IUCN), the United Nations educational, Scientific and Cultural Organization (UNESCO) and the Natural Resources Defence Council (NRDC) has identified seven marine sites in the Arctic considered worthy of World Heritage Site designation. 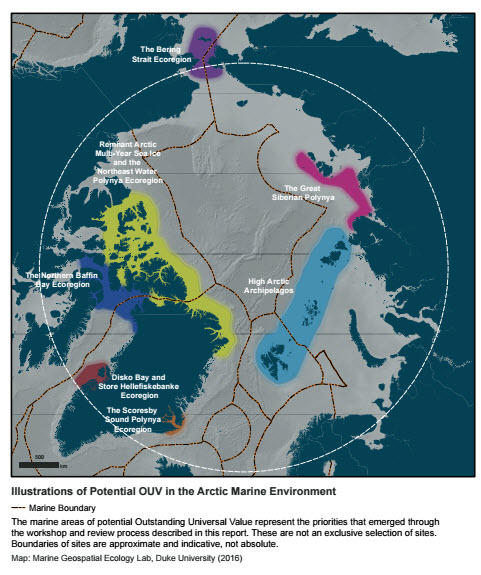 The proposed sites are:

As the Pacific gateway to the Arctic Ocean, the Bering Strait Ecoregion is one of the world’s great migration corridors. An estimated 12 million seabirds nest, forage and breed in the Bering Strait Ecoregion, and hundreds of thousands of marine mammals of several species migrate through the Strait in both spring and fall. The region also illustrates important geological history, having functioned during periods of low sea level as a land bridge between North America and Eurasia.

Containing much of the thickest, oldest ice in the Arctic and one of its largest polynyas, this region presents a striking combination of Arctic marine phenomena. Multi-year sea ice, a globally unique habitat, and its associated species are likely to persist for the longest period of time here as the Arctic warms and sea ice melts. The adjacent Northeast Water Polynya supports many species, including the critically endangered Spitsbergen stock of bowhead whale.

This area contains the North Water Polynya, the largest Arctic polynya and one of the most productive marine environments in the Arctic Ocean, if not the entire Northern Hemisphere. The North Water Polynya supports the largest single-species aggregation of seabirds (little auks) anywhere on earth. Lancaster Sound supports high concentrations of polar bears, and the Northern Baffin Bay Ecoregion is of critical importance to most of the global population of narwhal, the entire Eastern High Arctic/Baffin Bay beluga population and a significant proportion of the Eastern Canada-West Greenland bowhead whale population.

Complex physical and ecological processes in the Disko Bay and Store Hellefiskebanke Ecoregion, which is linked to an existing World Heritage site in western Greenland, lead to enhanced primary production in this area, which in turn supports diverse Arctic mammals and seabirds. Store Hellefiskebanke is a critical winter habitat for the West Greenland/ Baffin Island walrus population (around 1,400 animals estimated in 2012), along with hundreds of thousands of king eiders.

Consisting of the waters between and around the Arctic’s extreme northern archipelagos (Svalbard, Franz Josef Land and Severnaya Zemlya), the High Arctic Archipelagos separate shallow coastal seas from the deep Arctic Basin and are a region of high productivity and important habitat for walrus, polar bear and other threatened species. The shelf topography of the region is extremely diverse and includes archipelagos and islands, insular shelves, shallow and deep-water fjords, edge and cross troughs, and sea-bottom edge glacial formations. The High Arctic Archipelagos support connected populations of birds and mammals, including 85 percent of the global population of ivory gulls.

Located in the Russian Arctic, the Great Siberian Polynya is a spectacular example of Arctic polynya ecosystems and is of great significance to marine biological diversity. Most species of fish, and nearly all the seabirds and marine mammals in the Laptev Sea, are dependent on the Great Siberian Polynya. This region is also one of the most important ice-exporting areas in the Arctic.

“The Arctic Ocean plays a crucial role in shaping global climate and hosts a diverse range of species, many of them threatened,” says Carl Gustaf Lundin, Director of IUCN’s Global Marine and Polar Programme. “The World Heritage Convention has great potential to increase global recognition and protection of the region’s most exceptional habitats.”

“This report supplies another nudge to nations around the Arctic that they need to start acting now to conserve these areas of local, national and international significance,” says Clive Tesar, lead of WWF’s Last Ice Area project. “Conservation takes time. As we have seen from the annual records set by shrinking Arctic sea ice, we may not have much time to ensure that these areas can function as a reservoir for animals such as polar bears and narwhals whose homes are melting away.”