Norway’s Amon Maritime, which seeks to become the world’s first carbon-free shipping company, announced plans to expand its efforts with ammonia as a maritime fuel to launch the first platform supply vessels that can operate carbon-free. The new fleet which expects to launch by 2025 is designed to meet Norwegian regulations for the oil and gas and offshore energy sector to decarbonize. Amon report it has become the first to receive flag approval for the next generation of platform supply vessels (PSVs).

The Norwegian Government has set a goal for all PSVs operating on the Norwegian Continental Shelf to reach zero emissions by 2030. According to Amon, this will require approximately 80 newbuilds or significantly modified/rebuilt vessels to be delivered between 2025-2030. Meeting this requirement will be a massive boost for innovation and value creation in the maritime industry according to Amon’s management.

“This is the next generation. We are combining new technologies with future requirements, enabling capabilities only available for newbuildings,” said André Risholm, Founder & CEO of Amon Maritime. “Our vessels will be carbon-free, future-proof, and holistically designed for ammonia fuel from the ground up.”

The company reports the project was launched in 2020 and they are working with one of the leading designers of offshore vessels, Kongsberg Maritime, to create the new vessels which will be in full compliance with the 2030 requirements. The companies are collaborating with oil companies operating on the Norwegian Continental Shelf to develop the designs for the cargo and operational capabilities of the PSVs.

“These vessels will represent the next generation platform supply vessel and Amon Maritime will set a new standard in the logistics in the segment with these newbuildings,” said Jørn Heltne, Vice President for Ship Design sales in Kongsberg Maritime. He believes the vessels will be a game changer for the market. 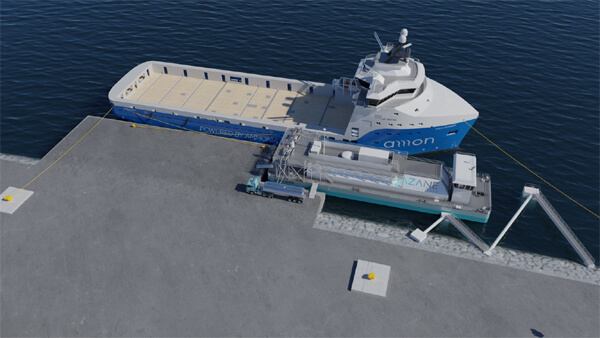 Amon is also working closely with the DNV as the classification society and the Norwegian maritime authorities in the development of the design. They report that the PSV received approval in principle for gas-fueled operation with an ammonia notation from DNV. Further, Norway issued its letter of preliminary assessment in May 2022, providing the world’s first preliminary flag approval for an ammonia-powered ship.

Amon Maritime announced the start of a new company specializing in the offshore market, Amon Offshore, which will build, own, and operate the fleet of ammonia-powered supply ships. The effort will also work with Amon’s efforts in developing ammonia bunkering including a floating bunkering terminal being developed by an affiliated company Azane Fuel Solutions. The ammonia fuel will be provided by project partner Yara Clean Ammonia.

Amon Offshore reports it is working closely with its current clients and others in the offshore energy sector to obtain charters, enabling the first ships to be delivered in 2025.