After 12 Years, Court Rules In Favor of Athos I

After 12 years of litigation, a federal district court has decided in favor of the owners of the tanker Athos I on a claim related to the one of the largest tanker spills in the U.S. since the Exxon Valdez.

On the evening of November 26, 2004, the 60,000 dwt tanker Athos I struck an uncharted nine ton anchor on the river bed located about a ship’s length off the CITGO Asphalt Refining Company (CARCO) berth at Paulsboro, New Jersey. The single bottom tanker was holed in her Number 7 port ballast tank and Number 7 center cargo tank, resulting in a spill of 265,000 gallons of heavy crude oil. Some 280 miles of river shoreline were affected, including 70 miles heavily to moderately oiled – resulting in cleanup costs, natural resources and third party claims totaling to $300 million.

The Coast Guard determined that the Athos I, her crew and her pilots had made no errors in their approach to the dock and were not at fault in the underwater allision, and no fines or penalties were levied on owners Frescati Shipping Company or operator Tsakos Shipping & Trading. The USCG even issued a letter of commendation to the firms for their quick and cooperative response to the spill.

In a suit filed against CARCO in 2004, Frescati alleged that by contracting the Athos to deliver a cargo and then failing to ensure a safe approach to the berth, CARCO was liable for tens of millions in damages related to the allision. Frescati claimed that it had incurred and was owed $143 million in spill response costs, less $88 million refunded by the U.S. government (which joined the suit to recover the rest). 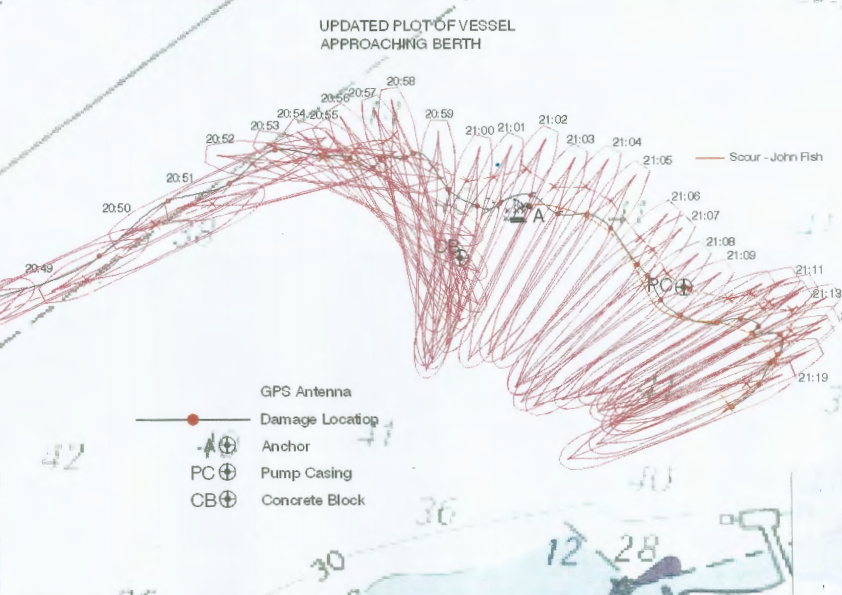 Plot of Athos’ position at one minute intervals (court exhibit)

On Monday, Federal District Court Judge Joel Slomsky agreed with their claims and ruled that CARCO had breached its "safe berth warranty," its contractual guarantee to the Athos' operator that she would be able to safely reach the dock so long as she kept her draft at less than a specified depth.

As compensation, Judge Slomsky ruled that CARCO must pay the balance of Frescati's costs, $55 million, plus half of the federal government's costs, or $44 million, plus interest.

In closing, Slomsky recalled that the decade-plus case had generated over two months of testimony plus endless legal proceedings, with a small army of participants. Today, the remains of the Athos amount to "a cut-out section of the hull displaying two unique holes with jagged edges [in] a shed in Baltimore, Maryland, near a rusted anchor with a fluke that has an evenly curled bent tip. The story of the final voyage of the Athos I and the reasons why it came to rest prematurely may be in the minds of the maritime community for years to come. But in this Court, for now, its legal journey will conclude here," he wrote.