The United States Navy traces its origins to the Continental Navy, which the Continental Congress established on 13 October 1775, by authorizing the procurement and dispatch of two armed vessels to cruise in search of munitions ships supplying the British Army in America. The legislation also established a Naval Committee to supervise the work. All together, the Continental Navy numbered some fifty ships over the course of the American War for Independence, with approximately twenty warships active at its maximum strength. 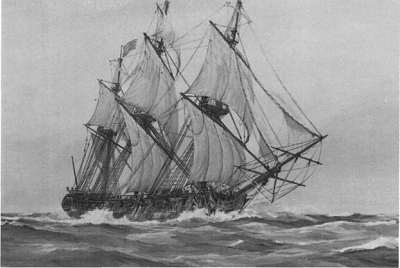 After the war, Congress sold the surviving ships of the Continental Navy and released the seamen and officers. The Constitution of the United States, ratified in 1789, empowered Congress "to provide and maintain a navy." Under President George Washington threats to American merchant shipping by pirates in the Mediterranean led to the Naval Act of 1794, which created a permanent standing U.S. Navy. Six frigates were authorized as part of the Act.

Over the next 20 years, the Navy fought the French Navy in the Quasi-War (1798–99), Barbary states in the First and Second Barbary Wars, and the British in the War of 1812. After the War of 1812, the U.S. Navy was at peace until the Mexican-American war in 1846, and served to combat piracy in the Mediterranean and Caribbean seas, as well fighting the slave trade.

In 1845, the Naval Academy was founded. In 1861, the American Civil War began and the U.S. Navy fought the small Confederate Navy with both sailing ships and ironclad ships while forming a blockade that shut down the Confederacy's civilian shipping. After the Civil war, most of the ships were laid up in reserve, and by 1878, the Navy was just 6,000 men. 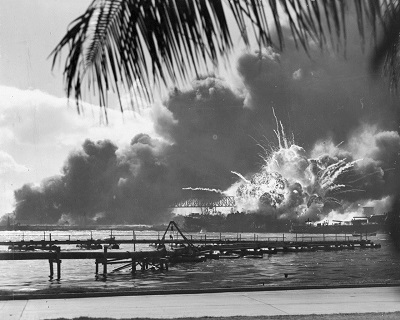 In 1882, the U.S. Navy consisted of many outdated ship designs. Over the next decade, Congress approved building multiple modern armored cruisers and battleships, and by around the start of the 20th century had moved from twelfth place in 1870 to fifth place in terms of numbers of ships.

After winning two major battles during the 1898 Spanish-American War, the Navy continued to build more ships, and by the end of World War I had more men and women in uniform than the Royal Navy. The Washington Naval Conference recognized the Navy as equal in capital ship size to the Royal Navy, and during the 1920s and 1930s, the Navy built several aircraft carriers and battleships.

The Navy was drawn into World War II after the Japanese Attack on Pearl Harbor on 7 December 1941, and over the next four years fought many historic battles including the Battle of the Coral Sea, the Battle of Midway, multiple naval battles during the Guadalcanal Campaign, and the largest naval battle in history, the Battle of Leyte Gulf.

Much of the Navy's activity concerned the support of landings, not only with the "island-hopping" campaign in the Pacific, but also with the European landings. When the Japanese surrendered, a large flotilla entered Tokyo Bay to witness the formal ceremony conducted on the battleship Missouri, on which officials from the Japanese government signed the Japanese Instrument of Surrender. By the end of the war, the Navy had over 1,600 warships.

After World War II ended, the U.S. Navy entered the Cold War and participated in the Korean War, the Vietnam War, the Persian Gulf War, and the Iraq War. Following the collapse of the Soviet Union, the Soviet Navy fell apart, which made the United States the world's undisputed naval superpower. 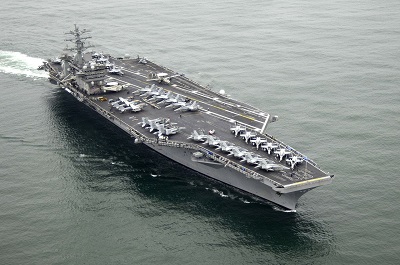 Nuclear power and ballistic missile technology led to new ship propulsion and weapon systems, which were used in the Nimitz-class aircraft carriers and Ohio-class submarines. By 1978, the number of ships had dwindled to less than 400, many of which were from World War II, which prompted Ronald Reagan to institute a program for a modern, 600-ship Navy. Today, the United States is the world's undisputed naval superpower, with the ability to engage and project power in two simultaneous limited wars along separate fronts.

Not to be confused with the Navy Birthday or the founding of the Navy Department, is Navy Day. The Navy League sponsored the first national observance of Navy Day in 1922 designed to give recognition to the naval service. The Navy League of New York proposed that the official observance be on 27 October in honor of President Theodore Roosevelt, who had been born on that day.