Archeologists working for the U.S. Army Corps of Engineers, Savannah District, aided by divers and salvage operations teams from the U.S. Navy, retrieved a 64-square-foot section of a Civil War ironclad warship from the bottom of the Savannah River here, the evening of Nov. 12.

The divers worked in strong currents with near-zero visibility during the past week to assess the possibility of lifting a small piece of the Confederate ship's casemate for archeological testing.

A crane lifted it onto a barge anchored near historic Old Fort Jackson on the eastern edge of Savannah. Experts estimate the piece weighs more than 5,000 pounds.

Julie Morgan, a staff archeologist with the U.S. Army Corps of Engineers Savannah District, stands next to a 5,000-pound piece of the CSS Georgia, a Civil War ironclad scuttled in the Savannah River in 1864. 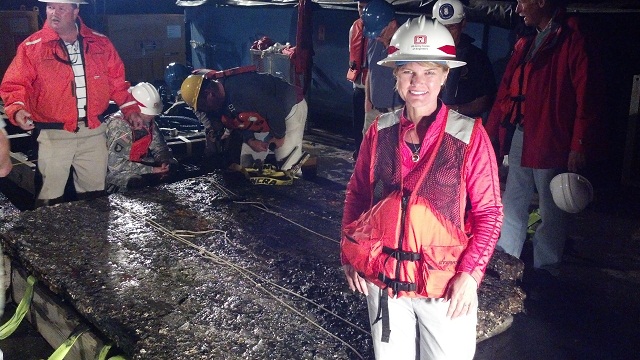 The Confederate navy scuttled the CSS Georgia in 1864, as Union troops approached Savannah. The iron-covered ship remained on the river bottom until 1969, when a dredge removing sediment from the shipping channel struck a portion of the ship, according to Julie Morgan, staff archeologist for the Corps' Savannah District. A brief recovery effort in the late 1980s removed two cannons, various types of munitions and other artifacts.

"This retrieval will play a major role in creating a research design to effectively remove the CSS Georgia before expanding the shipping channel along this stretch of the Savannah River," said Morgan. "It took a dedicated team working in some very tough conditions to bring this piece to the surface."

Over time, the ship's casemate, the iron-covered upper portion of the warship, came apart. The small portion removed Nov. 12 will give archeologists the ability to assess the condition of the remainder of the ship, according to Morgan, and ensure the team follows protocols from the National Historic Preservation Act of 1966.

The Savannah Harbor Expansion Project, or SHEP, includes removal and preservation of CSS Georgia, which sits immediately adjacent to the shipping channel. The SHEP will deepen Savannah's harbor from its current 42-foot depth to 47 feet, greatly expanding its capability to handle larger cargo vessels. More about SHEP can be found at: http://www.sas.usace.army.mil/Missions/CivilWorks/SavannahHarborExpansion.aspx.