App will be used to record whale sightings in real-time; crowdsourced data may help prevent whales from being struck by ships traveling in and out of San Francisco Bay.

This week, Bay Area scientists will field-test the beta version of a new "Whale Spotter" app designed to track whale sightings around the Golden Gate.  The app is intended to collect data about the movement of whales in the area and help prevent whales from being struck by ships traveling offshore and through the Golden Gate.

The testing will take place on a weeklong research cruise, during which scientists from Point Blue Conservation Science (Point Blue) and NOAA’s Cordell Bank and Gulf of Farallones National Marine Sanctuaries will record whale sightings with the app.  During the cruise they will also monitor seabirds, fish, and the marine food web.  This unique partnership, Applied California Current Ecosystem Studies or ACCESS, conducts ocean research and supports marine conservation for ocean health off Northern and Central California.

Blue and humpback whales visit outside the Golden Gate every year to feed on krill – tiny shrimp-like creatures –putting them in the path of increasingly busy shipping lanes.  In 2010, at least four endangered whales were documented as having been struck by ships, including a blue whale and a fin whale.  This year, several dead whales have washed up on Bay Area beaches, both from confirmed and suspected ship strikes.

“Each year, over 7,300 large ship transits go through the Golden Gate – a number that continues to increase,” explained Dr. Jaime Jahncke, Director of Point Blue’s California Current Research Group.  “We need a way to gather real-time data about where whales are likely to congregate given how many ships travel near their feeding areas.  This will in turn better inform decisions by wildlife management agencies and the shipping industry.”

This past June, the Coast Guard changed shipping lanes leading into San Francisco Bay to improve maritime safety and to avoid areas where whales have been shown to concentrate.  To determine the best course for these lanes, Point Blue scientists contributed data on where the whales congregate over many years and seasons.  This information was used to inform options for configuring lanes to benefit whales.  With the changes, ships now travel in and out of San Francisco Bay through three newly narrowed and extended points of entry, keeping ship traffic more closely contained through whale feeding grounds, and avoiding the areas off the coast where whales concentrate the most.

“Having data on whale movement is key to working with the shipping industry and making informed management decisions,” said Dan Howard, Superintendent of Cordell Bank National Marine Sanctuary.  “Having real-time information from the Whale Spotter app will take data collation to a whole new level.  We’re looking forward to seeing the results of this app and working collaboratively with the U.S. Coast Guard and the shipping industry to help prevent whale strikes.” 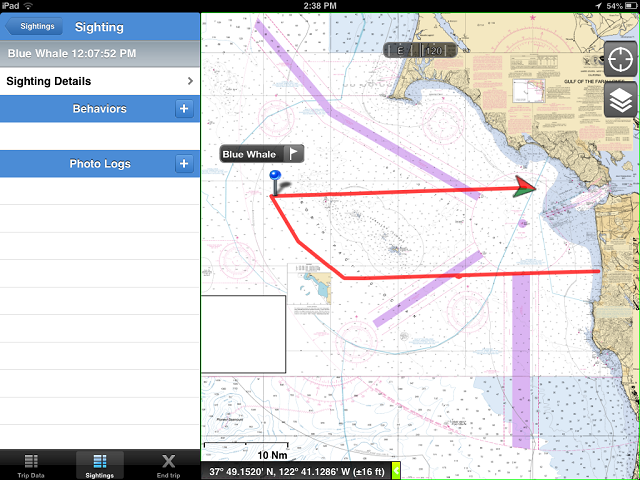 Developed by Conserve.IO, the app is intended for use by researchers, commercial ship operators, charter fishing boat operators, whale watching naturalists, and recreational and commercial fishers to document whale sightings in real-time.  The crowdsourced data will be checked and refined by aerial surveys and observations from Point Blue biologists on land at the Southeast Farallon Island and by other biologists at sea on marine surveying cruises.  The data will then provide the National Oceanic & Atmospheric Administration (NOAA) and the US Coast Guard’s Vessel Traffic Service with the information they need to recommend that shipping traffic reroute to an alternate traffic lane if whales are feeding in the lane or reduce vessel speed.

Several endangered whale species inhabit these waters, including some that are recovering from the impacts of whale hunting: at one time Richmond, CA was the last active whaling port in the United States.  The accidental death of just three blue whales each year in U.S. waters would slow their rate of recovery.  Although only a handful of shipstruck whales may be reported each year, scientists believe that number to be far greater given that most whales struck by ships never make it to shore, sinking in the ocean.  In fact, scientists with Cascadia Research estimate that there could be 10 times as many lethal whale strikes taking place than are actually detected.

An iOS version of the app is available for free download through the ITunes store here. 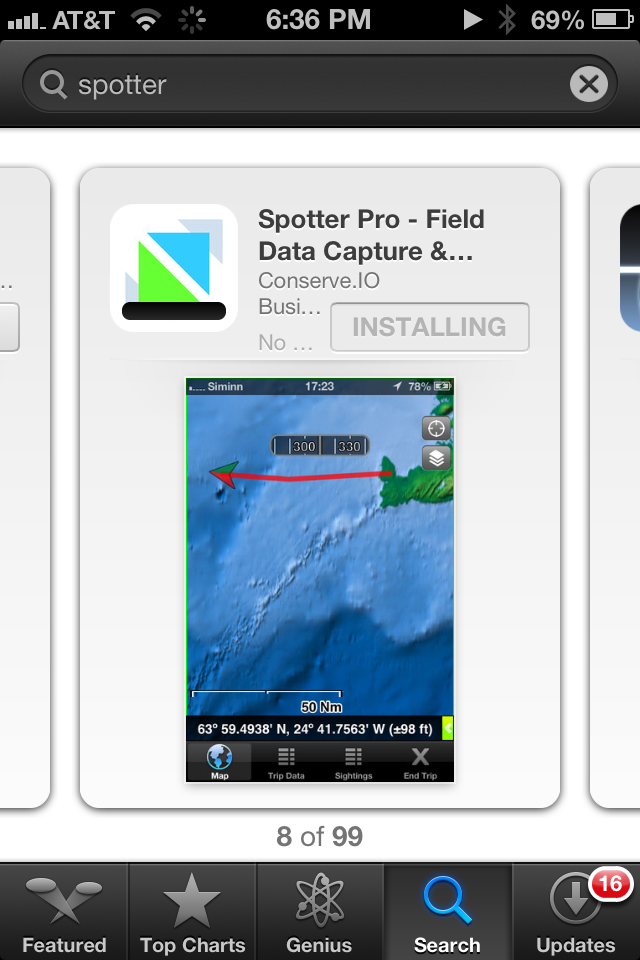