Nearly five years after the Deepwater Horizon explosion led to the release of roughly 200 million gallons of oil into the Gulf of Mexico, scientists are still working to answer the question: Where did all the oil go? 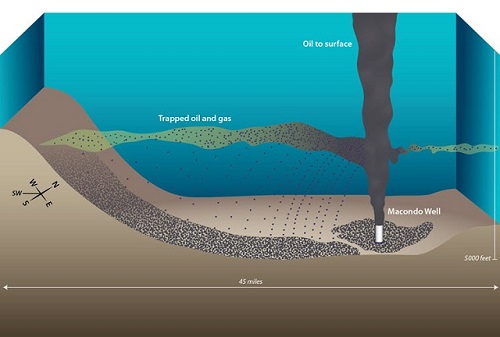 During the 2010 crisis, some of the oil gushing from the seafloor appeared as slicks on the sea surface, while roughly half of it, scientists estimate, remained trapped in deep ocean plumes of mixed oil and gas, one of which was more than a mile wide, hundreds of feet high and extended for miles southwest of the broken riser pipe at the damaged Macondo well. Many natural processes—like evaporation and biodegradation—and human actions—like the use of dispersants and flaring of gas at the surface—impacted the chemical makeup and fate of the oil, adding to the complexity of accounting for it. 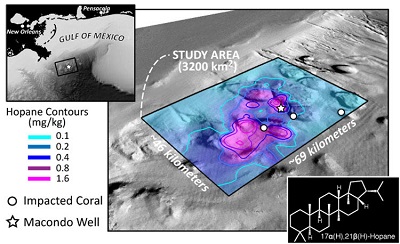 “In 2010, we only considered that material flowing from the well and heading southwest was dissolved in a plume. What this study reveals is that some droplets of oil also trended southwest leaving an imprint of oil for about 25 miles, and getting less and less concentrated as it moved farther from the well,” said co-author Chris Reddy, a marine chemist at Woods Hole Oceanographic Institution (WHOI), who was part of the team that mapped and characterized the plume in 2010.

The research team concluded that 4 to 31 percent of the oil trapped in the deep ocean plume fell within a 1,250-square-mile patch of the deep seafloor. Importantly, the paper also determined that, for the most part, the oil was deposited within 25 miles of the Macondo well, in a southwesterly direction – the direction the plume had traveled during the spill. Additionally, the footprint of oil delivered to the seafloor was about two percent of the footprint for slicks at the surface, showing that oil spread much more widely at the surface than it did in the deep, noted lead author David Valentine, a professor of Earth science and biology at the University of California, Santa Barbara.

The researchers used publicly available data from the Natural Resource Damage Assessment process conducted by the National Oceanic and Atmospheric Administration. The data came from 3,000 samples of seafloor sediments collected at 534 locations by a dozen research expeditions that surveyed the Gulf of Mexico in 2010 and 2011.

Within the sampled sediments, the scientists focused on the concentration and distribution of hopane, a degradation-resistant compound found in Macondo well oil and most other crudes from the Gulf of Mexico. Since it takes many years for seafloor sediments to accumulate as much as one inch, the scientists argued that elevated levels of hopane from Macondo well oil would show up only in the top half-inch of the ocean sediments and that the highest concentrations would be closest to the damaged well. 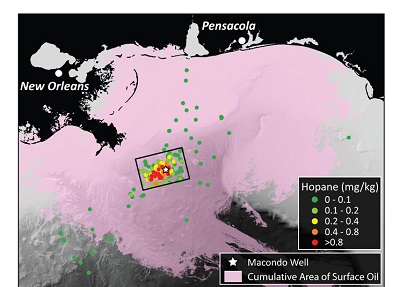 The researchers analyzed the spatial distribution of hopane in the northern Gulf of Mexico and found it was most concentrated in a thin patchy layer at the sea floor within 25 miles of the ruptured well, most intensively to its southwest. Peak concentrations of oil were in sediments at depths of approximately 4,000 – 5,000 feet, but as shallow as 3,000 feet and as deep as nearly 6,000 feet.

The researchers say their estimate of the quantity of oil on the seafloor is a minimum figure because they suspect some oiled sediments were not sampled during the research expeditions, including other suspected oily areas around the well, and that some oil certainly was also deposited outside the research zone.

Importantly, the research identified hotspots of oil fallout near communities of damaged deep-sea corals, supporting previously disputed findings that these corals were damaged by the Deepwater Horizon spill.

The research illuminates several new pieces in the puzzle to assess environmental damage caused by the Deepwater Horizon spill and supplies new insights into the behavior of oil in the ocean.

“Beyond the estimate of how much oil is on the seafloor, this work helps us understand where and how far oil can travel in an oil-gas mixture in the deep ocean, and it helps us figure out where to look for impacts on the seafloor,” says Reddy.

“This analysis provides us with, for the first time, some closure on the question ‘Where did the oil go and how?’,” said Don Rice, program director in the Division of Ocean Sciences at the National Science Foundation, which funded the study. “It also alerts us that this knowledge remains largely provisional until we can fully account for the remaining 70 percent.”