While ship operators sweat under the pressure of fuel costs, competition for hull coating business is keener than ever. Coating manufacturers emphasize claimed performance benefits, and some even offer a guarantee of improved fuel efficiency – but how does an owner judge the best coating for his vessel?

Now the marketing war has moved to rival measurement systems, each presumably intended to highlight the benefits of its sponsors. Choosing a measurement system can be even more confusing than choosing a coating. Jotun, International Paints, and Hempel are among the manufacturers vying for the measurement high ground.

“Lies, damned lies and statistics” may be a common response to manufacturer claims for hull coatings – certainly there is healthy skepticism – but is it that hard to work out what coating gives the best efficiency?

Proving performance benefits is important in the current climate. Anti-fouling coatings are under pressure: copper-based antifouling has never approached the efficiency of the now-banned Tributyltin (TBT), and its days seem to be numbered due to growing environmental concerns.

Silicone/fluoropolymer foul release coatings have failed to shake their reputation for fragility and difficulty of application and repair. Hard glass-flake coatings are less common but are gaining traction, especially in ice-going areas where their durability and green credentials are strong arguments. But operators want to know which will give them the lowest fuel bills.

A fouled hull requires as much as 40% more power to drive it through the water. One U.S. Navy study even put the figure as high as 86% when a badly fouled ship is cruising at speed.

Frictional resistance of the hull against the water has to be isolated from this mass of data before accurate measurement and comparison of coating efficiency can even be attempted. Differentiating hull performance from propeller efficiency is particularly difficult. But the job is actually even more complex: Measurements taken during steering, acceleration and deceleration are inherently unreliable.

And most importantly, what about long-term efficiency? Biocidal coatings gradually lose potency during use and even the most effective of them accumulate some degree of fouling. Mechanical damage from chains or debris creates roughness, particularly on the softer fluoropolymer coatings. Repair of coatings – touching them up in drydock – results in surface roughness. Only the glass-flake hard coatings can realistically claim to be immune from general degradation.

As part of its efforts to reduce greenhouse gas emissions, the International Maritime Organization has asked the ISO to come up with a standard. In the meantime, rival proposals are emerging from ad hoc coalitions of manufacturers and measurement system companies.

Azko-Nobel/International Paint has partnered with maritime systems consultancy BMT Argoss to develop an open-source system which it hopes will form a basis for adoption. John Wilsher, International Paint’s Marketing Manager, says: “IP is proposing the BMT system, which measures a range of parameters and quantifies separately the effect of hull, propeller and engine efficiency, utilizing the accurate Metocean database to allow filtering out of weather effects. The IP proposal covers changes before and after docking and the degradation rates caused by hull effect.

“BMT Argoss has an accurate externally validated meteorological database,” adds Wilsher. “When the vessel data is sent to the central server it can be integrated with Metocean. The system can also separate out engine, hull and propeller effects through measuring parameters affected by each.”

Hempel is developing an independent standard for evaluating antifouling performance. Called the Antifouling Performance Index, or API, it assesses anti-fouling performance on a scale of 1 to 100. The index takes three main types of fouling into account: slime, algae and animals. Each of these is included in the calculation based on its observed appearance on the surface analyzed. Vessels are inspected during drydockings, after full service periods, or in diving inspections.

Jotun promotes its hull coatings with a guaranteed reduction in fuel use, usually between 4.5% to 6%, using its own proprietary efficiency measurement system as the yardstick to underpin promised efficiency improvement. The Jotun system is based on 1-15 second automatic recordings of shaft power, propeller rpm, vessel speed through water and over ground, draft forward and aft, wind force and water depth.

The data is screened for low true wind speeds in order to reduce the impact of wind and waves, and for power values above a certain lower limit (e.g., 50%), in order to exclude maneuvering periods and the like. Furthermore, water depth is used for screening to reduce the impact of shallow waters. The data is then compared to a reference speed–power curve and adjusted for other factors such as ballast and load conditions.

Although Nippon is happy to work with whatever monitoring system ship operators may be comfortable with, it doesn’t offer its own system. John Drew of the Marine Coatings Division thinks there is a lot to recommend an old-fashioned approach and says that, in reality, operators are going to make their judgment based on a simple metric – the size of their fuel bill. He says many operators consider improvements of 5% are probably too small to be outside the margin for error in data collection and calculation.

Ecospeed manufacturer Hydrex suggests that real-world conditions are likely to defy the most complex models. Owner Boud Van Rompay has developed a simple stats-based system, logging changes over time and compared against simple consumption figures. The system, SPOT (Ship-hull Performance Optimization Tool), is intentionally low-tech and robust since Van Rompay says differences of one or two percent are too small to be significant.

He feels, however, that degradation of coatings is such a major factor that it needs to be given much greater attention: “It is acknowledged in the shipping industry that blasting a conventionally coated 10-15 year-old ship hull back to bare steel can improve fuel consumption by 25-40%. This shows the fuel penalty attributable to a hull coating which has become rough with age. Obviously, the penalty doesn’t suddenly accrue after 10 years’ service. It is a gradual build-up beginning with initial coating damage and deterioration and compounded at every drydocking by spot repairs and partial repainting, each time leaving the hull rougher, until finally the hull has so much inherent drag that a full blasting and recoating is the only answer.”

The SPOT tool is offered free by Ecospeed. 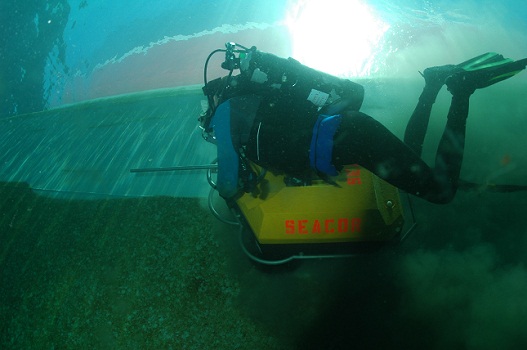 The Carbon War Room publishes a rating of over 60,000 ships on a simple A-to-G scale for fuel efficiency. This is aimed at the charter market with the intention that fuel-efficient ships will become more popular and drive owners towards lower carbon output. But in the absence of a common standard, hull coating efficiency is not yet a major influence on their assessments.

From January 1 of this year the IMO requires all ships over 400 gross tonnage to have their own Ship Energy Efficiency Management Plan (SEEMP). SEEMP encourages operators to find ways to improve efficiency, including the use of more efficient hull coatings. New ships with a keel-laying date on or after July 1, 2013 will also be required to meet the Energy Efficiency Design Index standards (EEDI) in order to be issued a certificate.

Dr. Tristan Smith of the UCL (University College London) Energy Institute commented: “There needs to be increased transparency in the data and analysis behind the performance claims of fuel-saving technology providers, combined with a level of specificity (for different types and sizes of ships).”

The equivalent of a reliable “mpg” figure for hull coatings would be very valuable. But none of the monitoring systems even attempt ship-to-ship comparisons, only addressing efficiency against a baseline established for each vessel. Comparisons between vessels are all but impossible. “Imagine two runners with different running shoes – which shoe is best?” says one manufacturer. – MarEx

Mike Garside is a freelance maritime writer. This is his second essay for MarEx on the subject of hull coatings and their effectiveness.