Freakonomics of the Shipping Business

Have you ever thought of the reasons behind marine accidents? I particularly wonder whether the rules of irrationality and moral hazard are at work here, too. To examine this, let's first connect the money to marine accidents.

After the accident, the marine insurance carrier compensates the shipowner. In the maritime industry, we have two main types of insurance: private insurers that cover hull and machinery (hence, "H&M") and protection and indemnity through non-profit organizations ("P&I clubs"). (Of course, there are many other insurance types for particular risks). P&I covers those costs excluded by H&M. Both types provide broad coverage and shipowners can recoup most of their losses from them, including the total value of the ship.

Paul Bennett investigated the marine insurance sector and concluded that:

It is economically rational for an individual shipowner to take less care once insured because they know that the costs of any accident will be shared amongst all. But if all shipowners took this view the result would be extremely high premiums for everyone—an irrational outcome based on entirely rational decision-making.

The collective actions of shipowners can result in the misfortune of higher premiums for everyone. That is what we call ‘Tragedy of Commons’! Moral hazard is one of the popular topics in the business of insurance. Insurance companies worried that protecting their clients from risks (like fire, or car accidents) might encourage those clients to behave in riskier ways or carelessly. According to some studies, car accidents increase with an insurance coverage. Is it only valid for protection against disasters or car accidents? Probably not!

Do shipowners really care about the misfortune of higher premiums, especially when everything goes wrong? Hugo Tiberg's statement gives us a clearer picture:

Fraud is rampant in Maritime Law and Insurance. There are a number of reasons for that. Ships and cargoes are comparatively easily disposed of either into the anonymity of the international theater or by being scuttled into the unfathomable vastness of the ocean depths.

"The anonymity of the international theater"—that is a perfect definition of maritime fraud: man-made marine accidents. 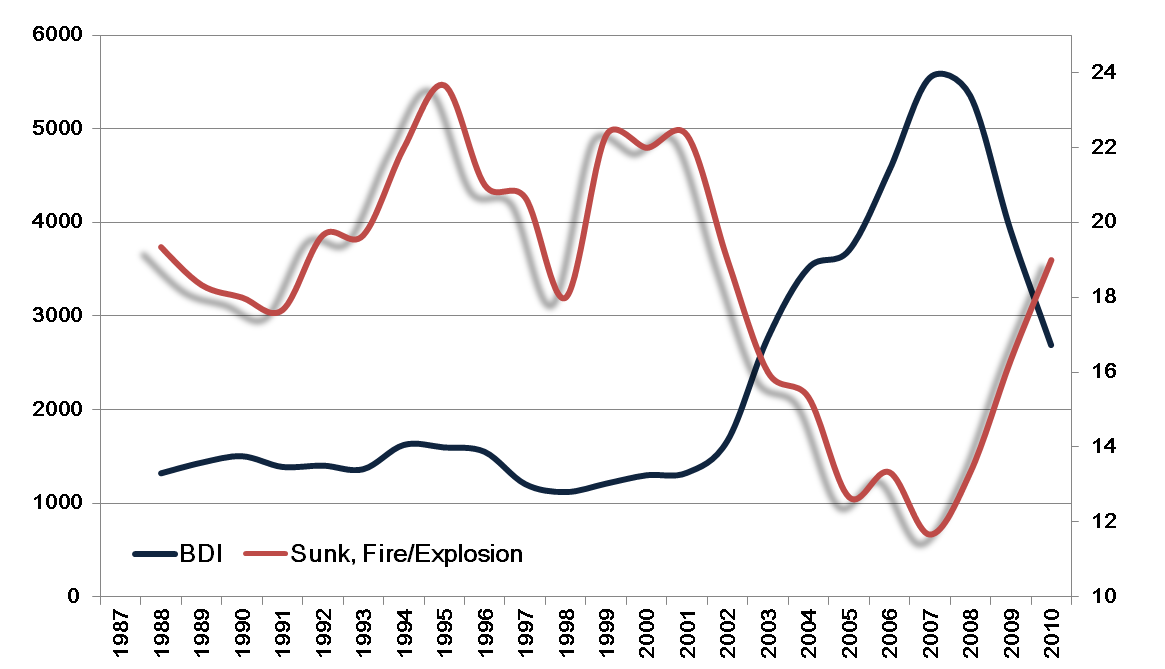 The correlation between these two data series is -0.85. It seems that most anonymous marine accidents are not ‘statistically’ accidental!

Have you ever read the best seller, ‘Freakonomics’ of Steven D. Levitt and Stephen J. Dubner? In the first chapter, they talk about Sumo wrestlers and statistically significant match-fixing in sumo tournaments! The man-made marine accident phenomenon is a kind of Freakonomics’ story. Nobody is able to identify it criminally while statistics points out the presence. A very optimistic defense can be based on the cost of being safe. When market collapses, the relative impact of operation costs (including seafarer wages and safety related costs) may increase and shipowners tend to reduce costs while taking risks. However, it is still very optimistic and insufficient to explain the reason of foundered ships in the middle of seas without a rational reason except the economic stimulus.

Moral hazard is not extraordinary in business life. Executives tend to focus on short-term since they are rated according to short-term performance (i.e. Short-termism). Brokers, experts, consultants and many other intermediaries of the industry work based on the commission. If there is a transaction, they earn commission. Then, it is not surprising to recognize that experts tend to fix contracts as soon as possible, and it does not big challenge whether the shipping market rises or declines. That is what we call ‘Commission Bias’. Finally, most of our financial assessment methods and instruments including discounted cash flow or net present value method lead us to be short-termer. Therefore, there is a structural motivation for not being moral or professionally careful at all. We need to rethink about ethics, morality and more importantly incentives drive people.

Okan Duru, Ph.D. can be reached at duruokan@yahoo.com for comments/questions.