Everything is going geospatial - Amazon, Google, Facebook, Pinterest.  Geospatial is defined as relating to data that is associated with a particular location.  In security terms, that means WHAT happened and WHERE did it happen.  So how does a geospatial surveillance system provide value to a seaport?

One of the biggest advantages of a geospatial system is it provides a high level of situational awareness.  Geospatial systems allow for a map-based representation of security sensors.   A user can view the GUI and quickly gain an understanding of the current state of events on one interface.  This includes the ability to dynamically show an intrusion event including the target location and the associated track.

A geospatial system also provides for user interaction through this same interface.  This means sensors can be queried and controlled by interaction with a map based display.   Sensors that can be used to interrogate or react the event, such as fixed cameras, PTZ cameras, acoustic devices, spotlights can be controlled from the GUI, using the animated intrusion track as means to direct the sensors to the exact location.

Geospatial sensors form the backbone of these systems and include radars, GPS and smart phones.  These sensors provide a large amount of data including time based location, speed and even acceleration.  There are, however, other sensors that can be enabled to be geospatial.   Fence intrusion systems can provide linear location along the fence line and cameras can be made into “visual-radars” through a pixel-to-terrain mapping process called “geo-referencing.”  PTZ cameras, laser illuminator, spotlights, range finders and acoustic devices, can also be enabled to be geospatial, allowing them to be monitored and controlled using latitude and longitude information. 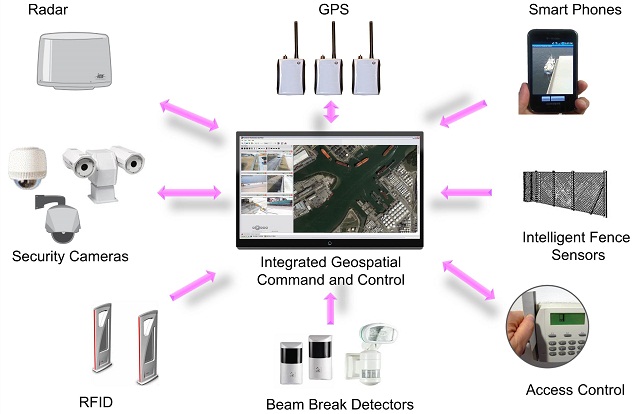 Another advantage of a geospatial surveillance system is the ease that sensors can share and collaborate information.  Geospatial sensors share a common operating picture, mainly a physical coordinate system.  This means they can effectively communicate with each other using a common geospatial command set.  This allows the system to easily automate many tasks that previously required operator control:

Finally, a geospatial system provides enhanced forensic value.  The ability to assign locations to events carries over into alarm searches and forensic efforts.  Each alarm contains location information so events may be investigated and reviewed based on a region or location, versus trying to identify specific sensors that were involved.  This can be extremely helpful when investigating specific incidents or looking at trends. Geospatial surveillance systems also have the ability to perform a full map based, scenario replay; essentially replaying everything that that operator was seeing on the screen, including alarms, sensor positions and map locations.  At any point the reviewer can drill down to get the detailed data associated with the event or sensor.

Geospatial is here to stay and the complexity of the seaport environment makes the use of these systems something to be strongly considered to effectively address many of the related security needs.

Written by Eric Olson, Vice President of Marketing at Phoenix-based video analytics developer PureTech Systems. He can be contacted at [email protected] or via twitter @puretechsystems.