Coast Guards in the Arctic - Troubles Ahead?

Coast guards are the maritime workhorses of coastal states, intent on protecting their sovereign rights to fisheries and petroleum resources, while also safeguarding lives and the environment. In an Arctic Klondike (rush on resources), this institution – which often operates in the shadow of national navies – does the heavy lifting. Yet, striking the right balance on fleet structure, investments, and Arctic presence in times of budget austerity is no easy task for Arctic coastal states. Maritime activity levels in the Arctic are increasing, compared to lower levels throughout the 1990s and early 2000s.

Waking up to a New Reality

Maritime activity levels in the Arctic are increasing, compared to low levels throughout the 1990s and early 2000s. It is not the number of trans-arctic voyages, but the number of ships with a destination in the Arctic itself that has predominately increased. This comes as a result of an increase in the transport of goods to and from the Arctic, and from an increase in cruise ship tourism offering “Arctic Cruises”. Similarly, exploratory drilling in Greenlandic, Alaskan or North Norwegian waters, and record yielding fish stocks in the Barents Sea and North Sea, contribute to this trend. 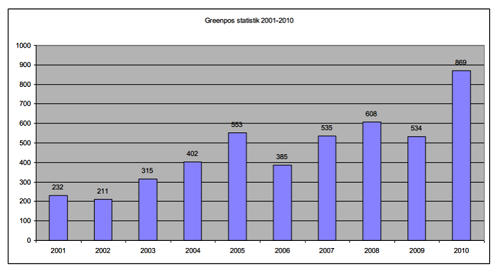 As activity increases, the need for an active management of the maritime domain increases as well. When fisheries grow in volume, so does the need for fisheries inspections and research to determine the sustainable yield of the stocks. When more vessels operate further north, search and rescue incidents grow in numbers, and as the number of exploratory drillings rises, the potential for accidents related to oil exploration similarly increases. The pressure on coast guards to provide aid to navigation is also increasing, sometimes demanding an ice breaking capacity that requires relatively costly investments in icebreakers.

Consequently, this large relative growth in activity spurs demand for a number of coast guard tasks in the Arctic, as depicted below. 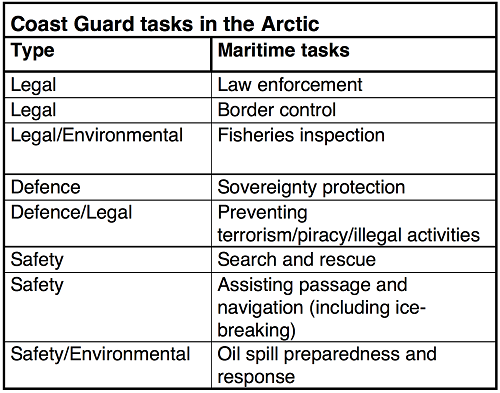 The coast guard institutional structure in one Arctic state is very different from the next, ranging from a civilian model without a law enforcing mandate (Canada), to military structures separated from (USA, Russia), or part of (Norway, Denmark), national navies. Yet, as the amount of tasks in northern waters increases, all of the various Arctic coast guards find themselves in a similar position, weighing priorities and resources. In particular, they encounter challenges concerning budget restraints, aging equipment and large areas of operation.

Investments in coast guards, on the other hand, in particular in the North American side of the Arctic, are pending. This is mainly a consequence of limited public investments in an area where the return rate of such investments – at least in according to strict economic calculations – can be questioned. In the context of low temperatures and remote operating areas, however, the consequences of a cruise ship accident or an oil spill is likely to become more fatal in the Arctic, than in more densely populated areas further south. 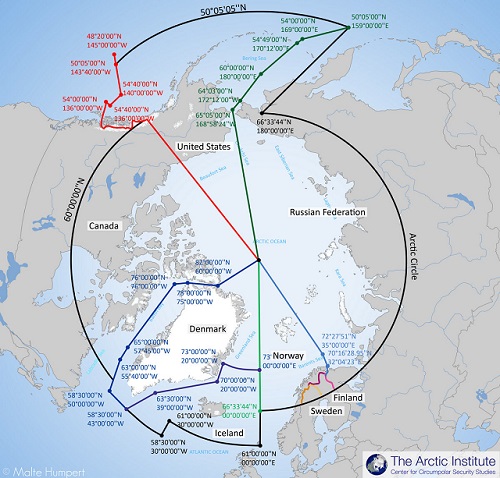 In 2011, Arctic states responded to this challenge by creating a legally binding search and rescue agreement under the auspices of the Arctic Council, dividing the Arctic into areas of responsibility (see map). In 2013, another agreement was signed on oil pollution, preparedness and response, implementing the same mechanisms for oil spill response. Forming alliances and initiating collaboration across borders with partners in similar situations provides a practical solution to a fiscal challenge. It is also an easier and less expensive remedy than building up domestic assets in isolation.

However, agreeing on zones of responsibility does not inherently enhance maritime capabilities in the Arctic, which ultimately fall under the prerogatives of the various national coast guards. Operational collaboration across borders is also not necessarily an adequate response to new maritime challenges in the Arctic. The share distance between the Arctic maritime zones and the differences in coast guard structures provide barriers to effective collaboration. Additionally, coast guard tasks are often closely linked to the protection of sovereign rights and enforcing national law. Such tasks are not easily transferred or outsourced.

Planning for the future

Working across Arctic maritime borders with your neighbor is undoubtedly beneficial, if not crucial, to jointly manage natural resources and protect the environment. The establishment of an Arctic Coast Guard Forum – building off the already well-functioning North Atlantic Coast Guard Forum – is one such measure.

Such collaboration will not, however, disband the need for national and local investments in future Arctic capabilities. The processes of coast guard procurement and capacity building are additionally costly and lengthy. Showcasing this challenge, the US Coast Guard has been calling out for more investment in District 17 (Alaska) for almost a decade, while in Canada the acquisition of a much-needed new Coast Guard icebreaker is delayed.

Littoral states in the Arctic have to carefully contemplate future investments and needs to avoid finding themselves in a situation where the former and the latter do not match. Arriving in 2030 in a direr state than today will be detrimental to any Arctic development. Preventing disaster is of interest to all littoral states as they determine the future potential of their Arctic maritime areas.

Andreas Østhagen is currently working as a program coordinator/fellow at the Norwegian Institute for Defence Studies (IFS) in Oslo. He also serves as Director for Norway at The Arctic Institute, having participated since the beginning. His Arctic passion stems as much from his everyday work, as from his heritage as a citizen of the Norwegian Arctic (Bodø, North Norway).