On Wednesday night, the floating fish processor Aleutian Falcon caught fire at the pier in Tacoma, Washington, sending up flames and smoke well into Thursday morning.

The fire started at about 2230 hours on Wednesday night, and the Tacoma fireboat Destiny was the first response asset. According to local media, no firefighters were permitted to board the vessel or approach on the dock because of safety concerns. The Falcon has taken on a list from firefighting water, and personnel have been kept off due to the risk of a capsizing, leaving the firefighting work to waterborne assets. By 0200 hours, three fireboats were on scene and directing water streams onto the hull for cooling.

Given this limitation, the response focused on containing the fire rather than stopping it, with efforts aimed at keeping the ship afloat and preventing the dock and other vessels from catching fire. The Aleutian Falcon is carrying nearly 10,000 pounds of ammonia, which is a common refrigerant gas for processor vessels; anhydrous ammonia is toxic and potentially flammable, so fireboat crews have paid extra attention to hull cooling in the area where it is stored on board. 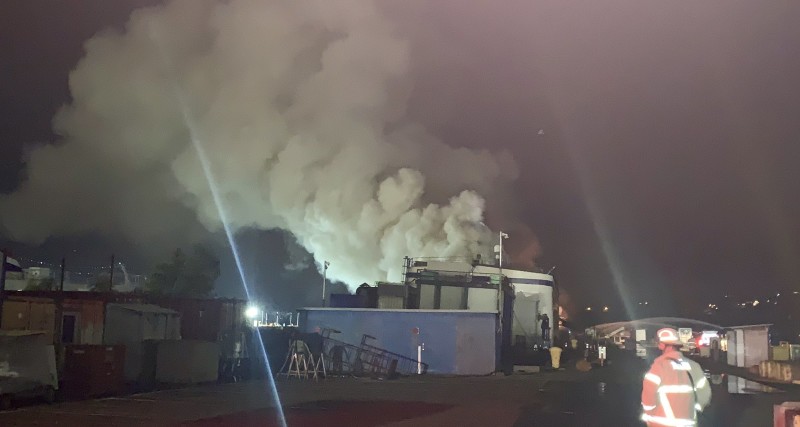 As of 1300 hours on Thursday, the vessel was still burning, but the smoke had abated enough that the fire department could lift a shelter in place advisory for northeast Tacoma.

Shipowner Trident Seafoods and the Tacoma Fire Department said that they are working on a dewatering plan to make sure that the vessel retains stability. The Falcon's tanks contain an estimated 48,000 gallons of diesel, and a capsizing could result in a spill. Containment booms have been deployed as a precautionary measure, and the U.S. Coast Guard has imposed a 1,500 yard safety zone around the site of the casualty.

The 40-year-old Aleutian Falcon is a 230-foot dedicated processing ship serving the Alaska herring and salmon seasons. She can support a crew of up to 120 when deployed and operating.

No injuries have been reported, but given the size and duration of the fire, the damage to the vessel is believed to be extensive.